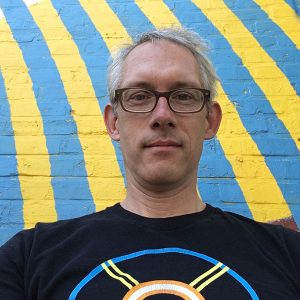 Occupation: I'm a professional musician; I play Balkan and Balkan-influenced music and also jazz and contemporary composition. I'm a bandleader, so a lot of my work time is on administrative tasks, but I try to find time to practice, too; I also work on bringing music education and performance opportunities to people in prison.

Connection to Balkan music/dance: I'm very fortunate to have integrated Balkan music into my daily life, mostly by playing tapan with my brass band Slavic Soul Party! I also play tenor horn with Veveritse Brass Band, teach tapan, and occasionally give presentations on Balkan music and brass band music to students (from elementary all the way up university level). I try to make sure that I also speak about the sources of the Balkan music that most inspires me, when I'm a bandleader—which isn't always easy at a dance party!

Number of times at Balkan camp: This year was my 20th anniversary of coming to Balkan camp! I've been at East Coast camp almost every year since then.

Studied at camp: This year I focused on Serbian Roma music and dance as taught by Demiran Ćerimović (brass band) and Alex Marković (dance). I also tried to be available and helpful during classes for kids.

Memorable moment at camp: This year Demiran's set in the dance hall stood out to me as representing many of the best things about camp. First of all, we had a teacher who was not only new to camp but was the first teacher from the Balkans to teach brass band. This was wonderful growth for our community, and Demiran filled the role beautifully. Secondly, he was touchingly dedicated to demonstrating the older brass band traditions of his community—values we often assume of Balkan musicians, but which are not a given in the living tradition that is Serbian brass and the accompanying market forces. Thirdly, the set brought staff and campers to new heights, as Demiran inspired the several generations of campers that accompanied him—members of Zlatne Uste Balkan Brass Band—to their most musical and compelling performance I've ever experienced, while Alex Marković shined a new light on many of the dances that our community has done for years. The dance hall radiated joy and appreciation, expertise and openness, roots and possibilities.