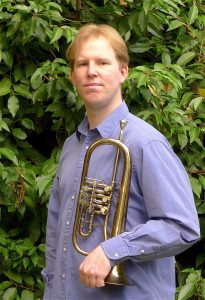 Connection to Balkan music/dance: I am director of the Balkan dance band Kef, which is finishing its tenth year of performing in Eugene and throughout the Pacific NW. We perform alternately as a small folk band and as a larger Macedonian-style brass band. www.balkanmusic.org

Additionally, I have the privilege of playing with Mark Levy and Carol Silverman in their group Slavej. As I write this, we have just concluded a wonderful weekend of performing at balkanalia! with a host of fantastic musicians, including Michael Lawson, David Bilides, Bill Lanphier and Adam Good.

Number of times at Balkan camp: This was my seventh Mendocino Balkan camp, having first attended as a college student in 2003.

Studied at camp: As a trumpet player, this was a year not to be missed. Demiran Ćerimović is a master of both the music and the instrument, and is one of today’s most beautiful players. Having a trumpet class in addition to the usual brass band was incredibly beneficial, and beyond that the additional private instruction time that I spent with Demiran was invaluable.

Memorable moment at camp: I think perhaps the most valuable thing that I was able to bring back with me this year came from delving into Demiran Ćerimović’s approach to improvisation. It was an impression I had already developed, but to hear it stated explicitly is very enlightening. Generally speaking, when playing a solo, he does not think about modes or chord tones or anything in a generic structural sense. Instead, each tune has a solo that goes with it. That is not to say that it is pre-composed, but rather that there is a sound the solo needs to have, to match the feel of the song. Often all of the various improvisations done during a given tune by different members of a group have a similar sound. What makes each solo unique is the way that the overall idea (which makes it unique to a particular tune) is threaded together by the idiosyncratic repertoire of “licks” each individual performer has under the fingers. Now, if only someone could articulate what makes a solo have the right feel for a given tune.