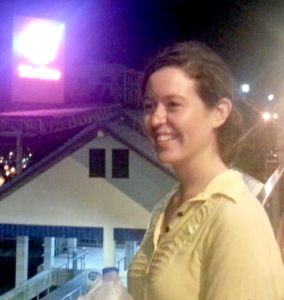 Occupation: Part-time translator and part-time bicycle courier; these are my day jobs while I try to advance a career as a musician. I front an original band in which I play guitar and keyboard, and do sideman/background work on those instruments as well.

Connection to Balkan music/dance: Friends and I regularly get together to learn and play Balkan music, usually accompanied by a few beers.

Studied at camp: Greek music for strings, but I was also introduced to makam theory.

Memorable moment at camp: The most touching for me were the moments in between the classes, parties, etc., when spontaneous small groups formed to play music. I remember swatting away mosquitoes while learning song after song from the young Greek dudes, the jangly sound of the guitars and bouzoukis among the trees. Or trying to figure out proper ornamentation technique with a fellow guitar student, struggling to see the fretboard as the sun set. Those moments of intimacy meant a lot to a first-timer like me.