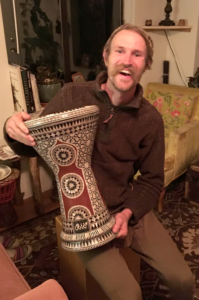 Occupation: I work as a musician, drumming, mostly Klezmer music, and recently Balkan as well! I also work seasonally in Yosemite National Park.

Connection to Balkan music/dance: I frequent local Balkan performances to listen and dance, and I am part of a rotating cast of musicians who perform at the weekly "Balkan Sundays" event in San Francisco. Camp gave me the opportunity to create and make stronger friendships with the players in the Bay Area Balkan scene and thus I have had many more opportunities to play and perform because of it. Thank you (:

Number of times at Balkan camp:  This was my first time at camp and it blew me away.

Studied at camp: I study drumming, both on tupan and doumbek.

Memorable moment at camp: It is difficult, no, impossible, to single out one memorable and special experience from such a loaded week of beauty and joy that could sum it all up. However, the week started with an exclamation point in my memory. Wide-eyed and taken back, the sound surrounded me completely. Heavy drumbeats dropped into my chest, and my temples reverberated with a sound so distinct, played so naturally, with emphasis so characteristically "Balkan," that I knew in an instant that this camp was going to be the real deal. Any one of the evening's dance party performances could easily be considered a highlight of virtuosic musicianship, community, and a lifted spirit. There was no better way to set the stage for this all on the first night, than with the raucous zurna and tupan set I remember so powerfully.

Thank you so so so much for all the work the EEFC does, and especially for the generosity that you showed me by awarding me a scholarship.