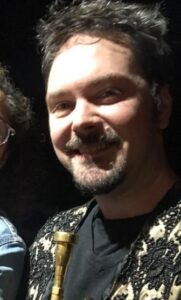 Location: I live in Oakland, CA and I have lived in the Bay Area since 2010.

Occupation: In 2018, I finished a Ph.D. at UC Berkeley in ethnomusicology, focusing on brass bands around the world, and my dissertation was specifically focused on the brass band scene of Rio de Janeiro, where there is actually a Balkan brass band (GoEast Orkestar) that visited Guča. Last year, I taught introductory classes to musics of the world in the Conservatory of Music at the University of the Pacific, and this year I will teach a similar class at the University of California, Davis. My experience at camp certainly will enrich my curriculum!

Connection to Balkan music/dance: I am a trumpet player in the Bay Area Balkan brass band Fanfare Zambaleta (https://www.fanfarezambaleta.com/). I play and sit in regularly in San Francisco’s weekly Balkan Sundays night, and in 2013-14, I played the Bay Area’s other Balkan brass band, Inspector Gadje. I am also a co-founder of San Francisco’s Mission Delirium Brass Band, which plays music from all over the world including the Balkans and toured in 2019 to Hungary, Croatia, and Slovenia (http://www.missiondelirium.com/).

Number of times at Balkan camp: This was my first time at camp. It was a blast!

Studied at camp: I focused on classes that I believed would improve my abilities on Balkan trumpet, including ornamentation, maqam theory, and brass band. I also dabbled in the improvisation, dance, and singing classes.

Memorable moment at camp: It was amazing to witness the high level of dancing and the dance knowledge of the community. As someone often playing rŭčenitsas, čočeks and pravos for people with much less awareness, it was very gratifying to see how quickly dancers recognized the rhythms of the dances and joined in. It was especially impactful to play with Fanfare Zambaleta in the center of the dance hall while the dancers circled around us. While I had been somewhat steeped in Balkan brass music before camp, the week in Mendocino broadened my awareness and abilities in folk dance and gave me a much deeper appreciation of and perspective on the music I play in other settings.