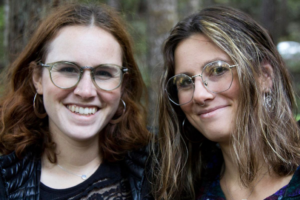 Katherine (right) with her sister, Emily, at camp.

Location: I am from San Diego, Calif., and currently live in Walla Walla, Wash.

Occupation: I am a student at Whitman College, studying physics and astronomy. I also work as a photographer on campus, and I work in a clothing store on the weekends.

Connection to Balkan music/dance: I listen to a lot of Balkan music in my everyday life, and help organize a yearly concert on campus that brings together people who play traditional music from around the world.

Number of times at Balkan camp: This was my first time!

Studied at camp: I didn’t really have a main focus at camp. I wanted to learn something new, which I succeeded in doing by taking the Greek rebetika ensemble class and learning the baglamas. I also was able to work on my skills in Greek singing, which I have been doing my whole life.

Memorable moment at camp: What really struck me about camp was the sense of community that develops over the course of the week. From my past experience, I have found individual groups of people who have roots in the Balkan region to be very close-knit, almost exclusive communities. The sharing of cultural knowledge that happens at camp was unlike any experience I’ve had before, and created a camaraderie and sense of community between everyone at camp. It was very touching to witness the sharing of passions between people and watch the group of people who were at first strangers to me become like a family.