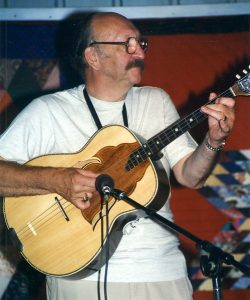 Tamburica player and teacher Vlad Popovich died on April 17, 2017.  A great American carrier of the tamburica tradition, he had taught numerous times at the EEFC Balkan Music and Dance Workshops, starting at Buffalo Gap in 1992, the last time at both camps in 1997. He also served on the EEFC board of directors from 1994-95.

Walter "Vlad" Popovich, was born August 8, 1931, in Niagara Falls, N.Y. While attending Duquesne University in Pittsburgh, Pa., he was a member of the Duquesne Tamburitzans, with whom he had the opportunity to tour the U.S. and perform twice in Yugoslavia. Later he played with the Balkan Serenaders of Lackawanna, N.Y., a group that played extensively for Serbian/Croatian community groups. He had experience with all the tamburica instruments but primarily played brač or čelo. Vlad was inducted into the Tamburitza Hall of Fame in 1993.

In his non-musical life, he earned a business degree from Duquesne University; served in the U.S. Army and the Army Reserve, retiring at the rank of full colonel; and retired as a project manager in the Linde Division of Union Carbide (now Praxair) after working for the company for 32 years.

He and his wife Evelyn, a fellow Tamburitzan (she played the prim), who died in 2014, had two sons, Steven and Peter. 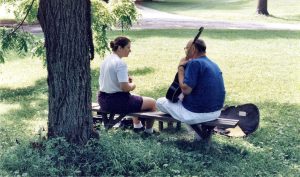 “I remember him from my early years at Buffalo Gap, when I made weak attempts to play the brač in the tamburica ensemble with Vlad, Charlie Smilinich and Danilo Yanich,” wrote Rachel MacFarlane to the EEFC listserv. “Vlad was kind and gentlemanly, but he was also wicked funny in a subtle and mischievous way.

“Vlad, Danilo, and Ray Ranic taught at Mendocino in 1997, the first year Esma Redžepova and her band came to our camps,” Rachel said. “I recall a golden evening there in the kafana, when the master tamburaši were treating all of us to their music, and there were Esma’s guys musicians , listening intently and rapturously. Seriously beautiful stuff. And who can forget that year’s auction—when Vlad et al. ‘won’ an auction spa treatment—to a fancy manicure that resulted in watermelon paintings on their nails that they proudly wore for the rest of the week.” 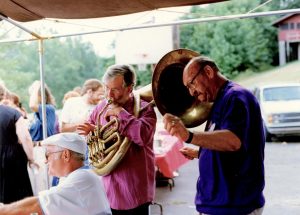 Vlad with his head in a tuba

On the listserv, Emerson Hawley added this memory: "Vlad's enthusiastic descriptions of the lamb spits they had at the Serbian Club in N. Tonawanda: Multiple spits stacked up in some kind of smoky enclosure; garlic to the max. All day roasting with plenty of šljivovica. Vlad and Charlie: stalwarts of soaking bread in the lamb drippings, popping garlic cloves. Not to mention tamburica.  Vlad loved playing the čelo; that part swings.  Having me as a brač pupil. . . private tutorials. . .you know the guy was patient.  My favorite picture of Vlad, taken by Margaret Loomis, is with his head deep inside the bell of my tuba."

Here is a link to Vlad’s official obituary  as well as to his article in Tamburitza Hall of Fame.