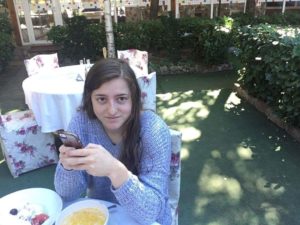 Connection to Balkan music/dance: I’m from Bulgaria, so I grew up immersed in Balkan music and culture. There are also a lot of Balkan music events in the Bay Area so there are lots of opportunities for me to be around live music and dancing.

Number of times at Balkan camp: This was my second time at East Coast camp. I am a lifetime West Coaster.

Studied at camp: My main focus was to play the trumpet, which I did in Nizo Alimov’s class. I also didn’t know until getting to camp that the Bulgarians did a class for youth teaching the traditional Bulgarian instruments, which I went to. It was a really amazing class to be a part of.

Memorable moment at camp: One really cool thing that East Coast camp does that Mendocino doesn't, is the grill. On any given night there would be spontaneous music and things that happened. One night there was a rebetika jam, which was awesome, and the blender bands were super fun to see. (I didn’t even know this was a thing.)

A lot of nights I found myself bouncing back and forth from inside the kafana to the grill.

Another really cool experience was listening and dancing to Zlatne Uste and Nizo Alimov in the dance hall. I came to learn trumpet, and to see him with the rest of the band playing live was really amazing.