Occupation:  I am a student. I actually have a music composition degree in classical music as well as Turkish traditional music; now I am studying in preparation for adding another profession: computer science. I teach music part time: piano and saxophone. Sometimes I do promotional work.

Connection to Balkan music/dance: I always listened to Turkish and some Balkan music as a kid, but I’m trained in saxophone—classical and jazz. Now I attend as many Balkan music events as I can and I play with Raif Hyseni’s Balkan-Albanian student ensemble at Montclair State University. We just learned that we will have the opportunity to play in Kosova this summer! I also play with Matt Moran’s band that is mainly saxophones and drum, Mountain Lions.

Number of times to Balkan camp: This was my first time at camp.

Studied at camp: I studied mostly improvisation. I attended Adam Good’s makam  theory class. I knew the makams but hadn’t applied them to sax until recently. I also took Christos [Govetas’s] improvisation class; it was very helpful. I took Raif’s Albanian/Kosovar ensemble. I attended a couple of Nizo [Alimov]’s trumpet classes and brass band ensemble on other days. 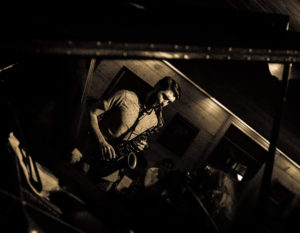 Memorable moment at camp: I was struck by the people—how amazing they are, how welcoming, how helpful—despite their being so different ethnically and religiously and all that. Even though I’m from Turkey, before I attended the camp, my views about other cultures . . .  I knew about them, but as a Turkish person, we had a lot of issues with Bulgarians, Greeks, so many wars between us. When I first attended the camp, I thought that Greek people would be hanging out with Greek people, Bulgarian people with Bulgarian people, and so on. It was not like that at all. Also, that first night I didn’t have a blanket and on the second day, literally at least five people said, “You got cold last night. I’m going to get you a blanket.” That changed me in the way I think about life. It was a life-changing experience.