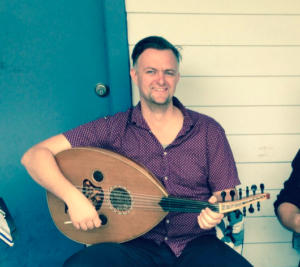 Occupation: I am a musician and doctoral student in ethnomusicology at the City University of New York.

Connection to Balkan music/dance: I play Balkan music with musicians in the Greater NYC area and in the Hudson Valley, where I live. I usually update my website with performances: matthewschreiber.net

Studied at camp: This year I focused on the oud and makam-based music.

Memorable moment at camp: I hope he doesn't mind me relaying this story, but in Christos Govetas' Greek singing class, he played the group a recording of a song at the end of class as people were packing up. It was about a shepherd whose sheep were roaming the hills but he was nowhere to be seen. As Christos described the meaning of the lyrics and revealed that the sheep were roaming the hills because the shepherd had died, he started to tear up, overwhelmed with emotion. That was a striking moment because it showed how deeply he feels the music and how important he felt it was to share that song with us. What a gift to be able to learn from musicians with not only an amazing sense of craft, but an intense emotional commitment to the music.