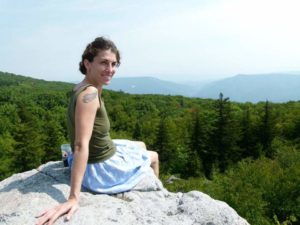 Location: I currently reside in Pittsburgh, Pa., in Manchester's North Side neighborhood.

Occupation: I have been taking care of my little ones at home for the past few years and in that time have re-immersed myself back into Eastern European folk music, particularly the tamburitzans.

Connection to Balkan music/dance: I grew up in a tamburitzans group in Southwestern Pa. and we focused on only Croatian music and dance. I was always very passionate about my heritage, the music, and folklore associate with it, but I also chose to do a lot of traveling later in life, not necessarily related to my Eastern European roots, and had stepped away from the music for several years for personal reasons. I am now in my second year as Assistant Music Director for the Trafford Junior Tamburitzans. We perform songs, music and dance from all of Eastern Europe, not only Croatia, and I knew I had a lot of catching up to do (and still do). My inspiration for wanting to attend Balkan camp this year was to expand and build my musical knowledge of all things Balkan and to bring that back to the kids I teach and the community I live in. Our group practices weekly and we perform several shows and venues throughout the year. We do our best to keep music and dance as close to original as possible, while injecting our own creativity.

Studied at camp: Coming into camp, I wanted to keep my options open as far as choosing classes. I wanted to get a well-rounded experience in dancing, singing and instruments, since our tamburitzans group does all three. I found myself being very attracted to the sounds that were coming from the Greek ensemble, so I jumped in with my tamburitza (prim). I also gravitated toward Albanian singing and makam theory, but also found myself sitting in on improvisation classes, Albanian dance, and more, and I loved it all. However, I would say I mostly focused on playing music.

Memorable moment at camp: After having some time to reflect on my experience, a few key moments stand out for me. Being invited to play with the tamburitza orchestra for the sing-along was special. I grew up with many of these old-time songs, listening to my grandpap and his friends play music on his porch while they drank his homemade moonshine. I had a strong feeling of nostalgia and pride at camp playing these songs; being one of the only members of my family keeping these traditions alive, it was a tear-jerking moment for me. Another fantastic moment was the Greek ensemble student performance. Again, being part of something bigger than myself, hearing the ensemble together and people dancing around and everyone enjoying themselves, is just a wonderful feeling. So many times at camp, I felt a sense of overwhelming happiness in being a part of it all. I was humbled to the core and could not have ever dreamed up the experiences I had there. A sincere THANK YOU to everyone at EEFC who makes Balkan camp possible and such a huge success.