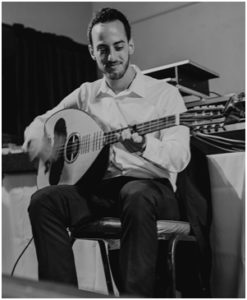 Connection to Balkan music/dance: I have been involved with Greek folk dance from a young age—performing at local festivals as well as the national Greek folk dance and choral competition known as FDF. As a college student, my involvement with Greek dance continued when I prepared a youth group for FDF. Furthermore, I have played the Cretan laouto and mandolin for over 10 years now, performing at FDF and various other occasions throughout the year. In the near future, I plan on learning to play the askomantoura (bagpipe).

Studied at camp: Since I arrived at camp later in the week, I was not able to regularly attend a specific workshop.

Memorable moment at camp: The entire experience was overwhelmingly inspiring. The vast amount and diversity in musical abilities and types surely broaden my scope. Being surrounded by so many wonderful people and soaking in the music played by so many talented musicians was so inspiring.