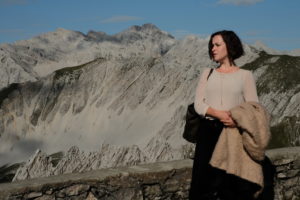 Connection to Balkan music/dance:  A lot of the Balkan music I have learned over the years I have been able to integrate into current working repertoire with my band Three for Silver. We mostly focus on original composition, but my style of writing and playing is heavily influenced by traditional world folk music. We have recorded a few of these traditional pieces on past albums and plan to do the same on our next album (release date set for Jan 2019).

Before Three for Silver I worked with the band The Underscore Orkestra for eight years. The focus with this ensemble was primarily traditional folk music of Eastern Europe and the Balkans as well as klezmer and swing manouche. There are links to their music on SoundCloud via www.theunderscoreorkestra.com.

Balkan music has played a major role in collaborations I have done with many musicians around the world, in professional settings and casual.

Most recently I have been able to integrate my love for learning and performing Balkan music with the U.S. Embassy Arts Envoy Program, a U.S. State Department cultural promotion program through the Media Relations Department, and the Portland–Khabarovsk Sister City Association. With these programs I have been able to perform in official settings for city officials, in classroom settings for music students in grades ranging from elementary to high school seniors, in college auditoriums, as well as in more typical music venues, and in doing so demonstrate how the integration of folk music with original contemporary composition helps to preserve the relevancy of musical heritage in today’s professional music scene.

Number of times at Balkan camp: My first year at camp was in 2007. I was not able to return until this past year.

Studied at camp: My main focus was accordion and vocal technique.

Memorable moment at camp: For me there were many moments at camp that left a strong impression. I'm not sure how best to single any one of them out. I will say that at the time I was going through a really difficult moment in life, experiencing a lot of doubt about my career path as a musician and was feeling a lot of heartache. The interactions I had, the conversations, the insight and encouragement I received, all of this was immensely validating. And inspiring.

One of the most memorable and joyful moments was being present from start to finish for Raif [Hyseni] and Svetlana [Spajić]'s spontaneous performance at the smokers’ table on the night of Raif's birthday. That was pure joy. It's amazing to me the extent of these teachers’ repertoire, that they can pull songs out of each other's heads and play for two hours straight with barely a break between songs. They all know so much, it's just incredible.