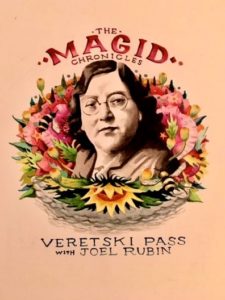 Veretski Pass, with Joel Rubin, has embarked on uncharted territory with their new project dedicated to performing the pieces collected by Sofia Magid, the Jewish ethnographer who worked intensively to document Jewish music in Belarus and Ukraine during Stalin’s regime in the 1920s and 30s. Magid’s 600 recordings include music that was not only collected by a woman, but that also features rare examples of women’s themes. Veretski Pass’ and Joel Rubin’s work involves cleaning, deciphering and transcribing the dubs of the cylinders, then arranging, performing and recording them and finally teaching them to workshop students.

An important facet of the project is the cadre of new compositions, improvisations, and re-compositions derived from and/or inspired by the Magid collection and drawing on traditions and cultures as diverse as Romanian, Turkish, Greek, and Hutsul traditions. Although derived largely from ethnographic work, this work is essentially a creative reimagination of the material. 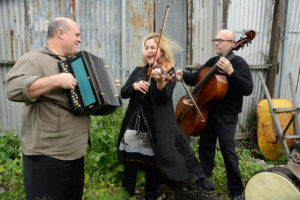 Taking its name from the mountain pass through which Magyar tribes crossed into the Carpathian basin to settle what later became the Austro-Hungarian Empire, Veretski Pass offers a unique and exciting combination of virtuosic musicianship and raw energy that has excited concertgoers across the world. The trio plays Old Country Music with origins in the Ottoman Empire, once fabled as the borderlands of the East and the West, in a collage of Carpathian, Jewish, Rumanian and Ottoman styles. Cookie Segelstein - violin; Joshua Horowitz - chromatic button accordion, cimbalom; and Stuart Brotman - bass.