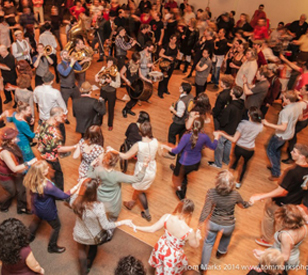 You know when it’s January? And you haven’t seen the sun since September? And the long, grey spring stretches out ahead of you with that little twinkle called Balkan camp at the end of the tunnel? And everybody else is partying out at Golden Fest? Every year at that time we would think, we really need to have something like Golden Fest that we can go to! In our town!

Then, at Mendocino camp in 2011, we were sitting around the smoking table with Christos [Govetas; Ruth’s husband], and the three of us looked at each other and said, “Let’s do it!” We pulled Steve Ramsey in to help, and that is where Balkan Night Northwest began.

So, on the one hand, it was a self-serving act. But underlying it was a very clear and specific goal: to bring in people from the cultures of the Balkans, as well as local “American” groups. Ethnic groups stick with themselves, and know their own cultures, but it is a revelation to them to see that their Balkan neighbors share some of the same traditions, and certainly the same passion for music, dance and community.

It was a bit of a gamble. We ran a Kickstarter to get seed money for the festival and rounded up more than a dozen bands (just locally). We made the decision that all performers at the event would volunteer their creative time and forego payment for services or travel; bands would be able to sell their recordings and merchandise with no commission taken. 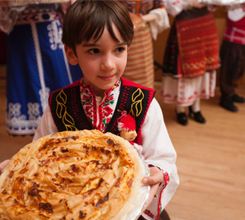 We got the hall, arranged for the Seattle Junior Tamburitzans to run the kitchen and bar, crossed our fingers and did it. We remember when we opened the doors at the first Balkan Night—the hall was full from the 4 p.m. start time; it was like stepping on a conveyer belt that was running a little bit too fast, but in a great way. Everyone was so thrilled and excited by what was happening, and we are just trying to keep that feeling continuing.

The first year Balkan Night Northwest (BNNW) had over 700 people in a hall that holds 350! Everyone came and no one left until the end. At one point the cops showed up, looked around, crossed their arms, nodded and said, “Yep, that’s illegal,” and left!

There are two stages, the main dance stage and the Kafana stage. The first year we had more than a dozen bands; the second year we expanded to two nights (Friday and Saturday) and ended up with 24 bands! The problem was that we still had the same number of attendees. So we went back to one night in 2013 in a bigger venue, and by all reports it is better than ever. We generally have about 100 performers and about 700 attendees. 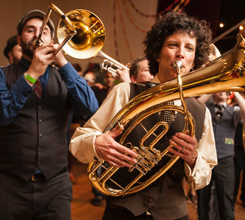 BNNW was held at the Russian Center in 2012 and 2013. In 2014, it moved to St. Demetrios Hall and we expect to keep it there. Dates have ranged from as early as February 21 (scheduled for 2015) to as late as March 16. Why the roaming dates? We are trying to keep it on the weekend of Apokries (Orthodox Mardi Gras). That way, all the Kukeri and Babouyeri (traditional Balkan mummers) make sense!

We charge $25 per person (youth 10-18 $10; under 10 free). Traditional Greek and Croatian food, along with beer, wine and soft drinks, are available for purchase. Funds are used to secure the hall, help with publicity, and bring world-class acts to the event from outside the Pacific Northwest. We sell advance tickets online and publicize the event heavily through Facebook and other avenues, with the help of local marketing genius Devon Leger. 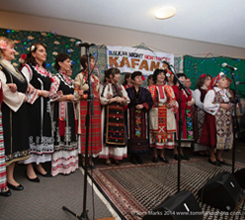 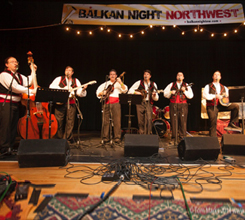 Each year we bring in a featured band from a specific region, and present a separate event the following night that just focuses on that band. This year we brought Kalin Kirilov and his group, and on the night after Balkan Night, the local Bulgarians put together an amazing evening of games and rituals that was delightful and meaningful. The year before, we brought Merita Halili and Raif Hyseni, and they sold out the Triple Door, full of Albanians from all over Albania—it was just electrifying!

In 2015 our featured artist will be Chris Bajmakovich and his band—and as always, there will be local community bands, ethnic ensembles, choirs (Mary Sherhart has an amazing choir of Bulgarian women, many of them older women, that will cut straight to your soul), young avant-garde people new to the genre. We are always in search of willing volunteers to help with the festival, so please contact us if you are interested.

Ruth Hunter has been an active participant at the Mendocino Balkan Music & Dance Workshops since the early 80s, and has been a resident of the Pacific Northwest since 1998. Ruth plays Greek and Balkan music in Drómeno with her husband Christos and their kids, and she directs the youth choir at Saint Demetrios Greek Orthodox Church in Seattle. Ruth and her family were profiled in the Spring 2010 Kef Times.

Musician, singer and teacher John Morovich specializes in the folklore of Croatia. He is artistic director of the Seattle Junior Tamburitzans, and Ženska Klapa Ružmarin. He performs regularly with the Sinovi Tamburitzans, a group he co-founded in 1979. He has created dozens of choreographies, scores for tamburitza orchestra and choirs, and has taught regularly at EEFC camps since 1987.