At the southern edge of the Rhodope Mountains, skirts of rock sweep down to the Drama plain. In six tiny villages where mountain and valley meet, an ancient Twelfth Night tradition endures. On the 6th of January, Theofania (Epiphany), masked men in goatskins and sheep bells dance through the streets to dispel evil spirits, awaken the fertility of the earth and ensure a good year. These are the koudonofori, the bell wearers, also called Arapides, the Black Ones or Moors. Wrapped in goatskins, skin smeared with burnt cork as a sign of fire, they will dance at crossroads, at the cemetery, in the plateia (town square) and in front of each house, in a ritual of blessing and catharsis which has roots in age-old worship of Dionysus, god of fertility and wine. 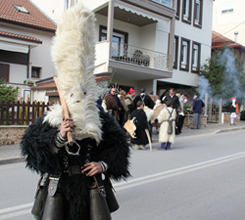 Their preparation starts the day before, in the House of the Arapis in Monastiraki. This reclaimed ruin comes alive with the joy of friends and acquaintances greeting one another, sharing red wine and the traditional goat stew served free to all. All through the night dozens of musicians will play the pear-shaped Macedonian bowed lyra or kemene, and the daïre or defi, a large goatskin frame drum with metal jingles set into the wooden frame. These are the only instruments present (1), with a spine-tinglingly archaic sound whose effect is all the more hypnotic as the musicians play in unison. Even the singing is monophonic. My friends explain that this musical structure emphasizes old values of community solidarity, coherence and unity, in contrast to polyphonic ensembles where each individual instrument aims to make itself distinctly audible within the whole.

On the upper floor, tightly packed circles dance the same few dances over and over: the three-measure pattern in various styles and names (Teska, Ramna, Lekka, Hasapia); the simple Syrtos-type steps of Evzonikos and Levendikos, key dances on this occasion; and a few slightly more complex patterns such as Mantzourana, Pardales Kaltses (Tsourapia), Kori Eleni, the unusual local Paidouska in 3/4 time and the special antikrista steps once danced back and forth by young men and women facing each other on the threshing floor. As on all ritual occasions, the repetition of familiar simple patterns frees the dancers to focus on the inner work of raising good energy (kefi) to bless the community. 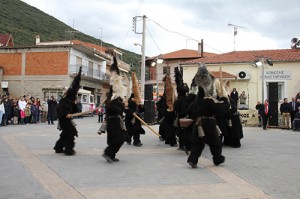 The floorboards sway and sag alarmingly under our feet. The vigorous dance rhythms penetrate the very timbers of the house, as if to awaken the masks and furs waiting in adjacent rooms and in the cellar below. Enormous bells hanging from the beams are invisibly stirred into a faint, unearthly ringing. Carefully balanced atop the piles of furs, the tall conical goatskin masks in the otherwise empty rooms have such a presence, one glance at them instantly raises the hair on my skin. Soon, these articles of costume will transform ordinary men into fearsome Arapides, with the power to drive out the kallikantzari (goblins) and other mischievous spirits believed to wreak havoc during the twelve nights of Christmas. In the early hours of dawn, after dancing and drinking all night, the male celebrants help each other dress in the shaggy dark skins and towering conical masks. Surrounded by the deafening racket of heavy double bells swinging from their broad leather belts, and brandishing long wooden swords, the group—known as a tseta—appear fully capable of warding off the kallikantzari and any other potential danger.

It has always been men’s task to protect the community, and the phallic swords and headdresses leave no doubt that the Theofania customs are men’s rituals. 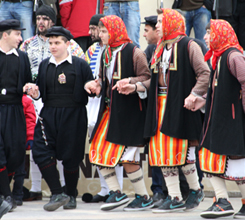 However, the ability to give new life, to enter the realms of the dead, and to bestow the blessing of fertility are essentially women’s powers; to claim them, some of the men must dress as women. These are the Gilinges, or Brides. Further emphasizing the unspoken presence of feminine power, their costumes are rich in goddess embroideries, and all members of the party wear beaded amulets in the lozenge-shaped symbol of female fertility going back to Neolithic times. Goddess symbols are even stamped on many of the bells themselves. Wearing women’s clothing may be a means for men to gain temporary access to the realms of life and death, as when they visit the cemetery at sunrise to play the favorite songs of tseta members who have passed on, or to symbolically give birth to the life-affirming joy and kefi which bring renewal at this dark and hungry time of the year. Either way, this sacred cross-dressing has been known throughout Greece and the Balkans since the first Dionysian revelers of ancient times, and remains an essential element of the Theofania rituals. 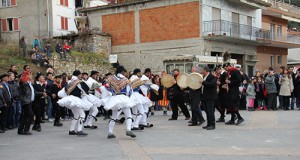 As well as the Arapides and the Brides, the tseta includes the Pappoudes or Grandfathers, in Thracian men’s traditional dress; the Evzones or Tsoliades (soldiers) wearing short white fustanellas and the tsevres, a triangular shawl-like garment made of twelve large white kerchiefs sewn together on the diagonal, densely fringed with beads, sequins and colored threads, which the women tell me takes four months to prepare. There is also an occasionally appearing Bear, who some say represents ancient worship of the goddess Artemis. They journey together through the village, dancing at every single house throughout the day. The Arapides leap and stamp and swing their bells in an apotropaic din—this will indeed awaken the earth!—almost drowning out the massed sound of the lyras and daïres. The Evzones dance athletically, with energetic leaping turns whose momentum sends their short fustanellas sailing up to their waists, activating and emphasizing (so the Arhigos (leader) assures me) the fertile power of the male generative organs. In their hands, they twirl long, beaded snakelike kordonia (lanyards), which give power and definition to their dance movements and fulfill the ritual function of the handkerchief normally held by the lead dancer. At every house the entire tseta is rewarded with food and abundant drink, in the living tradition of sacred hospitality, which is seen as the most powerful reciprocal blessing of all.

The Whole Village Gathers to Dance 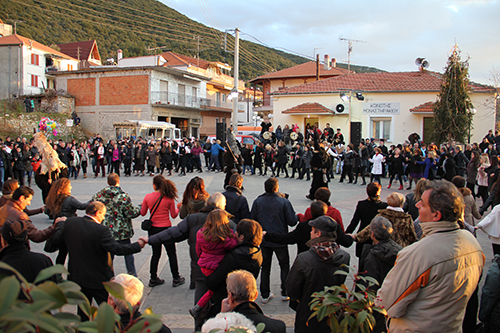 The great circle dance in the plateia of Monastiraki. (Lenka Harmon)

By three o’clock, the whole village gathers at the plateia to dance. Hundreds of people spiral into a single circle with one leader, keeping the large center open as a sacred space for the tseta to enact the ancient ritual dramas of death and resurrection, plowing and planting, the sacred wedding, stealing and rescuing the bride (2). The dancing goes on until dusk and then continues at a taverna for a second consecutive night.

That’s how it is in Monastiraki; each village enacts its own variation. In some places, children and women also participate in the Theofania rituals: in Ksiropotamos young girls in traditional costume dance through the village, while in Petrousa, all the daïre players are teenage girls, thirteen young women lined up like priestesses of Cybele from the time when the drummers were women. Here too, the villagers dance at crossroads, springs, sacred trees and finally around an enormous bonfire. 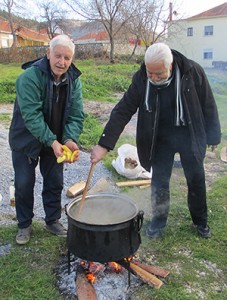 Cauldrons at the crossroads in Ksiropotamos. (Laura Shannon)

Fire is important in all the Theofania rituals. In the House of the Arapis in Monastiraki, the hearth fire will be kept burning for twelve nights and days, producing holy ash which will be used to bless people for the coming year. Cauldrons on open fires are a key part of the festivities everywhere, providing warmth and food for all comers, according to the hospitality of ancient tradition. In Petrousa, there is a special dance (Mayeiron, the Dance of the Cooks) in honor of these cauldrons, with an unusual symmetrical step pattern which focuses the energy or “fire” of the dancers in a particularly intense way.

It is dark; it is snowing; I am here not as an observer only, but with friends, and so I surrender to the hours and days of drinking and dancing, feeling myself warmed and transformed by this inner and outer fire. As we circle the bonfire together, it seems to me that all of these fire-focused rituals hint at the unnamed presence of the goddess Hestia, whose domain is centered on the hearth, the source of light, warmth, food and all that is beneficial to the home. The nikokira, the lady of the house, was seen since ancient times as Hestia’s priestess. Her role is to tend the sacred fire through practical and ritual work and to literally focus its brilliance (estiazo, from Hestia, means “to focus”) so that it may bless the household and all its inhabitants. In ritual activities such as the Theofania, through the mediation of men dressed as women, this focused fire can be brought once a year from the private space of the home—the realm of the women—into the public space of the village, the realm of the men. This union of men’s and women’s fertile powers is the holy spark of blessing which ensures health, wealth, happiness and abundance for all in the coming year. 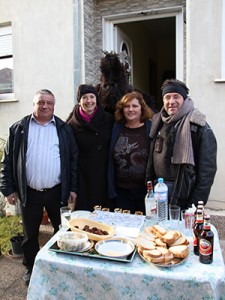 (1) In Monastiraki, Ksiropotamos, Petrousa, and Pyrghi, the lyra and daïre are played, while in Volakas and Kali Vrysi it is the daïre and gaïda (bagpipe). Only in Monastiraki, on other occasions, have I sometimes heard all three instruments played together.

(2) These same dramatic elements appear in other Greek ritual customs performed either at Theofania or during Carnival, including the Kaloyeros of Ayia Eleni, Karnivalia of Sohos, Baboyeroi of Flambouro, Tsekekia of Pondismeno, Boules of Naoussa—all of which I have had the privilege of witnessing in the incomparable company of Yvonne Hunt—and in the Bulgarian Survakari and Kukeri rituals and other customs found throughout the Balkans and Central Europe as far as the Swiss Alps.

Thanks to: Katerina Asteriou-Kavazi, Nikos Papadimitriou, Angelos Keras, Kyriakos Moisidis, Panayiotis Zikidis, Yvonne Hunt, and to Spyros Taramigos and Lenka Harmon for permission to include their photos.

Redmond, Layne. When the Drummers Were Women (1997)

Laura Shannon began attending Balkan camps in the late 1980s. She teaches Greek, Balkan and Armenian dance throughout Europe, North and South America and Australia, and since 2005 has been based in Greece researching village dance traditions. She is on the faculty of the Sacred Dance Department at the Findhorn Foundation in Scotland and is currently pursuing a master’s degree in Mythology and the Sacred at the University of Canterbury (UK). www.laurashannon.net