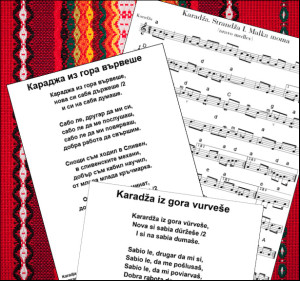 I put this pravo medley together as a musical spot when I was Music Director of Aman in the early '80s, when we were privileged to perform for the first three months of the opening of Disney World's Epcot Center. The medley was structured to enable folks to hear three of the main melodic modes heard in Bulgarian music: Karadzha is in Phrygian/kürdi; Strandzha I (in this arrangement) starts major but ends minor; and Malka Moma is in hijaz.

Recordings provided here are for the three individual tunes. (Ed. note: The transliteration style used for the file names below diverges from Kef Times style.)

[KT Editor's note: Thanks to Mark Levy and Rachel MacFarlane for assistance with these materials.]

* Pitu Guli, named after a hero of the anti­-Ottoman resistance movement in Macedonia, was a band made up of American musicians in Southern California who started playing Bulgarian and Macedonian music on folk instruments in around 1970. 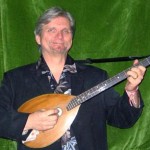 Bill Cope is a multi-instrumentalist who began playing Balkan music in 1975 and teaching at the Balkan Music & Dance Workshops in 1982. He’s made numerous trips to the Balkans and has studied and performed with many noted players and singers. Read a profile about him in the Spring 2007 Kef Times.

Bill is editor of Kef Times’ Balkan Songs. If you have an idea and transcriptions, translation and background for a song to be featured in a future issue, please contact him.