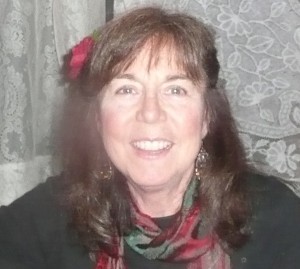 Occupation: I have been retired from Humboldt State University for one year and help my husband deliver mail on his contracted mail route in our surrounding rural countryside.

Connection to Balkan music/dance: I play music throughout the year in the International Folk Dance band, Chubritza. You might have seen us play on Sunday night in the kafana at Mendocino Balkan camp.  [Ed. note: Janet plays brač, accordion, doumbek, tupan, recorders, Irish flute, silver flute, frula and pennywhistles.]

Number of times at Balkan camp: I have been coming to Balkan Camp for many years beginning in 1994, when I started playing Balkan music with Chubritza.

Experience at camp: On the last day of kaval class my teacher, Valeri Georgiev, and I discovered that my Irish flute played very nicely with the kaval. The two instruments have similar warm sounds and some similar fingering patterns. As a beginner kaval player I was naturally struggling to play the kaval and found it to be the most difficult instrument that I had ever attempted to play. As a flute player of 50-plus years this was a humbling experience. I play the Irish flute in Chubritza as well as another Celtic folk band, Good Company, and so was naturally eager for my teacher to hear that I could indeed play the flute. We played duets together and both of us agreed that the two flutes sounded really nice together. Valeri was so patient with everyone in his class. Everyone received one-on-one instruction from him. I hope to take his class in again in the future, and I recommend this class to everyone.  Cheers, Janet