Bulgarian Harmony: In Village, Wedding, and Choral Music of the Last Century 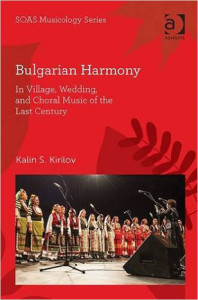 An in-depth study of the Bulgarian harmonic system is long overdue. More than two decades since the Le Mystère des Voix Bulgares choir was awarded a Grammy (1990), there is no scholarly study of the captivating sounds of Bulgarian vertical sonorities. Kalin Kirilov traces the gradual formation of a unique harmonic system that developed in three styles of Bulgarian music: village music from the 1930s to the 1990s, wedding music from the 1970s to 2000, and choral arrangements (obrabotki)—creations of the socialist period (1944-1989), popularized by Le Mystère des Voix Bulgares. Kirilov classifies the different approaches to harmony and situates them in their historical and cultural contexts, establishing new systems for analysis. In the process, he introduces a new system for the categorization of scales.

Kirilov argues that the ready-made concepts that are frequently forced onto Bulgarian music—“westernization,” “socialist” or “Middle Eastern influence,” are not only outdated but also too vague to be of use in understanding the sophisticated modal and harmonic systems found in Bulgarian music. As an insider who has performed, composed and arranged this music for 30 years, Kirilov is uniquely qualified to interpret it for an international audience.