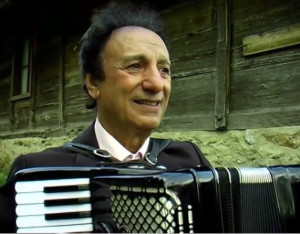 Ibro Lolov, one of Bulgaria’s great accordionists and Rom musicians, died in Sofia on September 14, 2015, at the age of 83.

“He was one of the pioneer accordionists who developed the style and technique of Bulgarian accordion in the 1950s along with Boris Karlov, Kosta Kolev, Ivan Šibilev and others,” says Yves Moreau. “Like Karlov, he enjoyed much popularity in neighboring Serbia and Macedonia. He also composed quite a few Bulgarian horo tunes and Roma kjucheks and accompanied many folk singers.”

Lolov was born on April 20, 1932 in Sofia, Bulgaria. He was a Rom from the Yerli group, according to Carol Silverman.

Carol was also able to contribute the following tidbits drawn from Bulgarian Wikipedia: Lolov started playing the accordion at age 11 and his first performances were in Sofia bars. His father, Lolo Najdenov, played clarinet in Korenyaškata Grupa. In 1953 Ibro Lolov made his first recordings at Radio Sofia. He maintained an active touring as well as recording schedule. He played with many popular singers such as Atanaska Todorova, Boris Mašalov, Mita Stojčeva, Kostadin Gugov and instrumentalists Petko Radev, Mladen Malakov and Didi Kušleva. He won many prizes and competitions, such as Laureate in the 1983 World Accordion Festival in France. He played Serbian, Greek and Romanian music as well as Bulgarian and Romani. His Shope style was characterized by staccato playing.

A few YouTube links of Ibro Lolov’s playing (you can find many more if you search):

Thanks to Yves Moreau and Carol Silverman for their help in preparing this article.