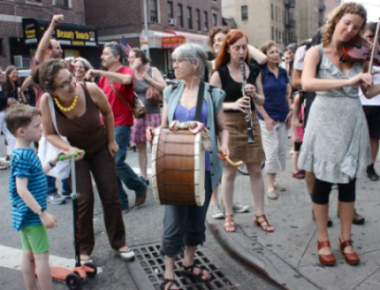 Occupation: I am a psychotherapist in private practice.

Connection to Balkan music/dance: I am so lucky to be living in a city where there is so much (although sometimes still feels like not enough) music and so many opportunities to dance. There is a folk dance group that meets bimonthly in a Chelsea studio which we try to keep alive, and an impromptu gathering in our local park which someone else from camp has organized for dancers and musicians, which I hope we can keep going as long as the weather permits. I continue to study the tapan privately and have participated when I can in classes (last year with the Bulgarians) and jams.

Number of times at Balkan camp: This was my fourth year at camp: I began by only attending a dance party. After the bed and breakfast option became available my whole experience changed: I remember how I felt leaving camp in the morning while the ensembles were gathered and people were playing music: I knew then that I needed to be a part of this environment and would be a camper. I began with 1/2 a week, then a full week, then only 1/2 (due to financial constraints), and finally this year I was able to have a full week at camp as a scholarship recipient.

Studied at camp: My classes concentrated on tapan—both instruction and ensemble playing; and of course, at least one dance class. This year Joe [Graziosi]'s Greek class captured me!

Memorable moment at camp: This year's camp has put me deeply in touch with the cultural roots of the music I have loved since I was a teenager. In my tapan class, Matt [Moran] collaborated with Alex [Marković] on a group of dances and rhythms which Alex has only seen in a small Serbian village. The set of rhythm changes was complicated and remained a "work in progress" even as we performed it at the end of the week. This to me was the essence of the real musical work we do at camp—the importance for me is in the effort and the learning, not as much in creating a polished finished product. Being part of an ensemble with professional musicians and scholars is an opportunity I cherish. Particularly moving was when Alex told us we were the first non-Roma people ever to play this sequence.

There is another visual image that stays with me—it is the expression on my friend's face on the last morning of camp. We are saying goodbye and I have asked her what it is like for her, as a person from the Balkans living in the U.S., to spend a week with so many people immersed in her own cultural heritage. She is moved to a great smile and to tears.

This year's camp has deepened my understanding and appreciation in ways new and surprising for me. I cherish what I have learned; I look forward to what lies ahead.