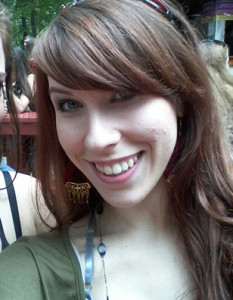 Connection to Balkan music/dance: I don't get too many opportunities throughout the year; usually just Golden Festival and occasional gatherings.

Studied at camp: I took beginner santouri, a variety of dance classes and the songbook singing class.

Memorable moment at camp: I grew up playing music but, since high school, dance has become my primary means of artistic expression. However, I miss playing instruments and was excited to be able to take music classes in a such a welcoming environment at camp. Waking up to santouri class, although difficult after late nights at kafana, quickly became my favorite part of the day.

During our first lesson, Yianni [Roussos] gave us a CD of music to help us practice. I didn't get a chance to listen the first day or so but I got in the habit of going in to practice during my lunch hour. After practicing the song we were learning in class, I started noodling around. I have a pretty good ear so I was able to pluck out a song that I was familiar with because my roommate Jen Shearer had used it this past winter in a choreography she designed for her belly dance students. The next day in class while we were warming up I started playing the tune and Yianni said to me "Oh, you learned one of the other songs from the CD?" I hadn't yet listened to the CD and only then did I realize that the song Jen had used must have been one that she had gotten from a previous camp CD. It was such a fun moment to realize even though I had never been to Balkan camp I had already taken in pieces of it by spending so much time with Jen. Although it was just a little coincidence, the moment still made an impression I won't soon forget.

Also, jamming out to a Balkan rendition of the Star Wars theme song in kafana, seeing the amazing generosity from the community during the auction and realizing how thankful I was to everyone who donated for making it possible for me to attend camp. One more: sitting and having a late breakfast at the picnic tables on a beautiful sunny morning and hearing the sounds of multiple ensembles and classes wafting through the air.