Occupation: I will be working as an archivist and a graduate student with the University of Oregon Folklore Department.

Connection to Balkan music/dance: I have been singing and performing with Planina: Songs of Eastern Europe.

Number of times at Balkan camp: This was my first time attending camp. 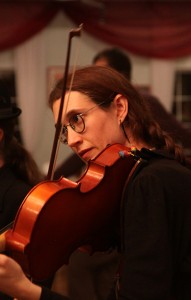 Studied at camp: I attended classes on Greek violin (or in my case, viola), Albanian singing, Macedonian tambura, Bulgarian tambura and santouri.

Memorable moment at camp: I arrived at camp late because I was flying in from the national festival in Koprivštica, Bulgaria, so I had to work hard to catch up with the classes. I decided that I wanted to observe the intermediate Bulgarian tambura class. When I arrived the teacher [Stoyan Kostov] and other students asked if I had any experience playing guitar. When I told them that I knew how to play guitar they scrambled to find me an instrument and explained the similarities in chords of the two instruments. One of the more experienced students met with me outside of class to give me a few pointers. Due to the patience and overall support of the class and our wonderful instructor I learned a great deal and was able to participate in the student concert. It was very encouraging to feel so supported to pick up a new instrument!