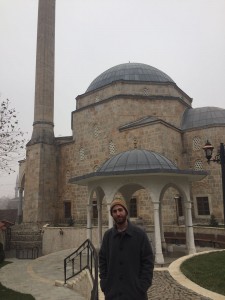 Occupation: I am a research analyst who specializes in the study of counterterrorism. I am currently working for a think tank in Tbilisi, but will be returning to the United States (Washington, D.C.) to continue working in a similar capacity.

Connection to Balkan music/dance: When I am back in my hometown, Boston, I enjoy attending the various Balkan dance events held by the Folk Arts Center of New England and other groups. Whenever I'm in a different town, I always try to find the Balkan recreational dance group. When I'm out of the country, I enjoy listening to Balkan and other types of folk music. In Tbilisi, I've loved going to Georgian folk music and singing concerts and hearing traditional music in its natural settings (usually at feasts, accompanied by copious amounts of Georgian wine).

Number of times at Balkan camp: This was my first time at camp, but hopefully not the last!

Studied at camp: I came to play çifteli in Raif [Hyseni] and Merita [Halili]'s Albanian ensemble and learn some tunes on the Macedonian tambura.

Memorable moment at camp: My parents are avid Balkan folk dancers in the Boston area and I was basically taken to events since I was in a stroller, but had never attended Balkan camp before. On behalf of a generous scholarship from the EEFC, I was finally able to attend last summer. People in Boston and D.C. who had attended for years told me that 1) I would never hear more awesome Balkan music in a one-week period than I would at Balkan camp; 2) the (in?)famous kafana parties are a marathon, not a sprint; and that 3) I would absolutely love it.

After attending camp for the first time, I can confirm that all of those reviews were 100% true. Every night, multiple all-star performers of Balkan music would play incredible sets for dancing in the main hall and the kafana. My favorites were the Pontic Greek sets, the zurla sets with Milo [Destanovski] and Jessica [Ruiz], and getting to hear younger musicians rock it out with Čoček Nation. Despite spending basically all night in the kafana every night, I was motivated to wake up to attend daytime classes taught by awesome musicians like Raif Hyseni, Milo and Jessica, and an amazing series of classes taught by one of the masters of Greek dance, Yvonne Hunt. In short, I loved every moment of Balkan camp and am itching to go back!