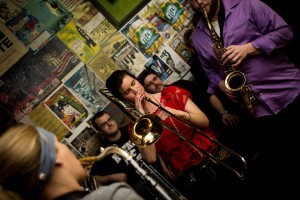 Connection to Balkan music/dance: I play trombone, sing, play Bulgarian kaval, and perform and record with the ensembles I have helped create in Ann Arbor, Mich.: Rhtya Musik and OrnâmatiK. The music we play invites the community to experience original compositions and uniquely arranged Eastern European folk music that fuses together cultural traditions with individual experiences and modern sensibilities. In addition, I rehearse regularly with a local study group, Priyateli, that I co-founded with Doug Allen and Abby Alwin, in which we continue our study of traditional Bulgarian music on traditional instruments. I am also a composer and continue to write music that is heavily influenced by immersion in Balkan music, dance and culture.

As someone who works with children, I also intersect with Balkan music and dance as a role model and teacher. I teach twelve students trombone privately and share music from Eastern Europe with them, many of whom are beginner players. I encourage performances in the schools and at local events, to share music and dance with our local community and teach open-mindedness and cultural awareness. I also nanny young children, ages toddler through pre-teen, and share Balkan music and dance with them through listening and playing, as well as simple things like oiling the Bulgarian kaval together.

Finally, I am drafting a proposal to arrange grant money for a local Ann Arbor program that supports musicians and builds healthy relationships through an accessible, free, family-friendly weekly program that promotes mindful exercise and a range of live music, including Balkan and Congolese local artist performances.

Number of times at Balkan camp: I've been coming to camp since 2011.

Memorable moment at camp: In years past, I have been able to travel with my band, OrnâmatiK, to Balkan camp and we have performed together at kafana, the late-night performing venue and eatery at Balkan camp. This year, though, OrnâmatiK's drummer—Drew Schmieding—and I were the only two band members able to attend camp. Because I did not travel with an ensemble, I was not planning on performing at kafana. But then several people at camp asked me, "When are you performing at kafana?" and when I responded "I'm not, this year," the answer I received back was "You have to!" So I was already touched by this enthusiasm and started looking at a way to make a performance happen.

I asked many performers and teachers, as well as peers, whom I deeply respect, if they would perform together with me at kafana, and they agreed! Thus, I organized the ensemble, "Bethanol & The High Octanes," which consisted of Polly Tapia Ferber on doumbek, Raif Hyseni on accordion, Adam Good on guitar, Paul Brown on bass, Drew Schmieding on drum set, Tim Allen on saxophone, and Abby Alwin on cello. This was such a wonderful cast! I was so honored to work with such masterful artists together and deeply touched that everyone made rehearsal possible and stayed up to perform even at 3 a.m.—and my mom also drove four hours to attend the performance! It is a very heartwarming memory for me and I am so grateful to everyone who made it happen!