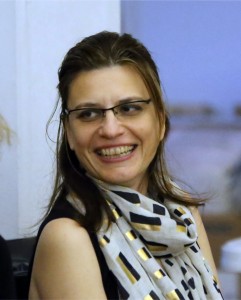 Occupation: I am an architect, working for a firm based in New York City.

Connection to Balkan music/dance: I am Bulgarian, from the Rhodope Mountains. Growing up, I was very visual and interested in other forms of art but not necessarily folklore. I discovered my interest in Bulgarian folk dancing years after I left Bulgaria, while in grad school in Cambridge, Mass. A friend at MIT had invited me to an event where Nikolay and Donka (Kolevi) and both of their daughters were performing. Martha Forsyth showed up with the Zdravets dancing group and I actually encountered the EEFC community for the first time. I was impressed with both musicians and dancers and quite surprised and intrigued by the discovery of this American community so interested in my culture. Initial curiosity gradually grew into more serious interest and eventually I started dancing with Cathie Springer’s group, Bosilek. I have been with them for 4 years already.

I am also involved with the Bulgarian cultural organization Young Bulgarian Voices New York since its creation. Initially the organization started as a language school and children’s choir. Looking for an opportunity to raise our son Kamen, who was born in the U.S.A. bilingual but also is aware of our Bulgarian cultural background, we enrolled him in the school that meets every Sunday. [Ed. note: Kamen is now 15 and also attended camp on scholarship this year; see his story here]. YBVNY is a nonprofit run by volunteers, and naturally both my husband and I got involved in the running of the organization. Over the years the needs of the growing Bulgarian community evolved and with them our organization. Today it offers a rich and engaging environment for both children and adults to learn not only the language and Bulgarian singing but also traditional dance and instruments such as kaba gajda and tupan. One of our special projects is 101 Kaba Gaidi NY, which brings together bagpipe players from all kinds of backgrounds.

Number of times at Balkan camp: This was my first year at camp.

Studied at camp: I took singing classes with Tzvetanka Varimezova (intermediate Bulgarian singing) and beginning level class with Elitsa Stoyneva as well as kaval class with Valeri Georgiev, and as many dance classes as I could fit in my schedule.

Memorable moment at camp: I very much enjoyed the time after dinner between 7:00 and 8:00 when everybody goes to their porch to rehearse and improvise.