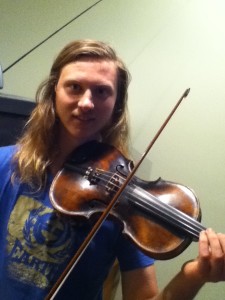 Connection to Balkan music/dance: I am really trying to learn the music. I got introduced to it last summer when I was hitchhiking in California and throughout the year since then I’ve been trying to fill my head with every bit I can get. There’s not much of a Balkan scene in Ohio that I’m aware of yet, but I’m actively playing and trying to learn as much as I can. I’m new to the music and to fiddle in general, but I played in a school band when I was young—saxophone, then percussion—and then later played a lot of hard-core really intense metal music. After high school I started traveling and explored different instruments, then learned about Middle Eastern scales, then started diving into Romanian music. I’m planning a trip to Moldova or Romania for this fall.

Number of times at Balkan camp: This was my first time.

Studied at camp: Greek violin with Beth Cohen, maqam theory with Beth, Miamon Miller’s violin class. I did a few sessions each with the Greek ensemble and Trans-Carpathian ensemble.

Memorable moment at camp: I was impressed by the bands that were assembling with people that maybe knew each other outside of camp or for previous camps but also people who were there for the first time, putting these little groups together to perform in the kafana. These musicians are so, SO talented and really know the styles. Coming together, they might read a little sheet music or not, but can make great sound. It was wonderful to be part of such a great community. The scenes with the bands in the kafana were definitely spectacular. I remember one great little klezmer ensemble that combined experienced campers and first-time attendees—super lively, great spirit.