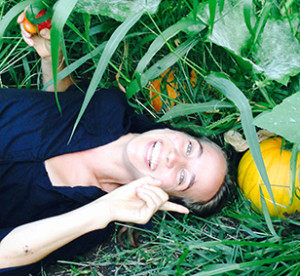 Occupation: I sing with Kitka, and I am a caterer, fishmonger, sound designer and composer.

Connection to Balkan music/dance: I play oud and study on my own, and also [sing] with Kitka. For dancing, I go to community dances when they happen, and go to as many Balkan shows as I can to dance the night away.

Number of times at Balkan camp: This was my first year at camp.

Memorable moment at camp: I was so touched by the way the community opened its arms to me, both socially and artistically. I had injured my wrist previous to coming to camp and so I wasn't able to play oud as I had hoped. I was on my way mournfully to an empty second period, when I passed Lise's Greek ensemble, and it was so glorious I couldn't help but stick right where I was. I got an idea that perhaps I could join them, learning the tunes just with my voice. I was a little nervous to ask, but when I did, I was met with such enthusiasm and support that all my fear melted away. I was able to sing with the ensemble the whole week, and learn songs which came up later that summer as I was in Greece studying music with the Labyrinth program.