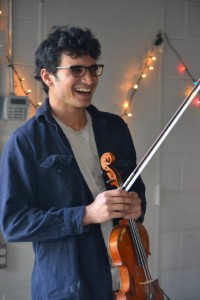 Occupation: I am a student at the University of Puget Sound.

Connection to Balkan music/dance: I sometimes take violin lessons in Balkan music and incorporate elements of the style into my compositions. Occasionally I get the opportunity to feature Balkan music and give a presentation about it during cultural awareness events at my school.

Number of times at Balkan camp: I came to camp for the first time when I was 7 years old, about 15 years ago.

Studied at camp: This year I took the theory and ornamentation class, beginning Balkan singing with Carol [Silverman], beginning dancing with Michael [Ginsburg] and Romanian violin with Miamon [Miller].

Memorable moment at camp: One experience that really left an impression on me this year was taking the Bulgarian theory and ornamentation class [with Kalin Kirilov]. It was fascinating to learn about the Balkan styles from a theoretical perspective, especially because my Western classical training has been largely based in this framework. It was mind-boggling to try to comprehend the complex asymmetric meters that Balkan musicians often use, and to examine the traditional patterns and motifs that guide improvisation. Our teacher made an observation that stuck with me, and it was that Balkan music is largely "modal" the same way that American jazz is. It is fascinating to see intersections of musical phenomena among cultures that are so far apart from each other. This is a big part of why I love music, especially Balkan music!