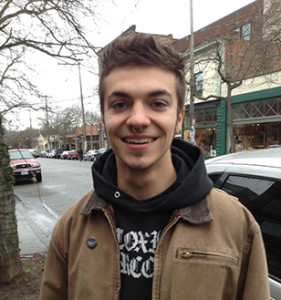 Occupation: I guess technically I'm unemployed, but I am often designing t-shirts and logos for people for money.

Connection to Balkan music/dance: I intersect with Balkan music for the rest of the year by playing [guitar] along to recordings usually, or if I'm on the left coast I can play Balkan music with real people!

Number of times at Balkan camp: This was my second year at Balkan Camp and there are sure to be more.

Studied at camp: I was studying mostly rebetika at camp.

Memorable moment at camp: An experience that really stuck out to me this year was watching Vlado [Pupinoski] and Kalin [Kirilov] play casually at the smokers’ table. They were just having musical conversation; changing so often in between new melodies but totally on the same page at all times. Then, after a twenty-minute medley of absolute mind destruction for the audience, they would have a cigarette and leave it between their fingers while they played the next tune like it was nothing. It was something I had never seen before.