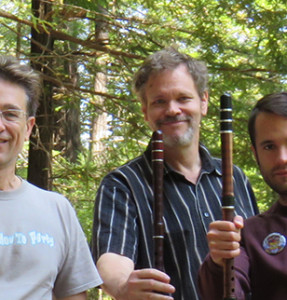 Connection to Balkan music/dance: I dance with two different folk dance clubs in the area. I participate in workshops held in the Eugene and Portland area (Veselo and Balkanalia). I've been the foreman of the floor crew that lays down the wooden floor over cement for several years at Balkanalia. I attend Balkan folk dance parties in Seattle (NW Balkan events and Folklife). I talk about Balkan folk dance with almost anybody that knows me.

This year I taught several Balkan dances at the new Dance Pavilion at The Oregon Country Fair. This enabled willing participants to join in and dance while our local Balkan band, Kef, provided live music. The Oregon Country Fair is a very large and unique annual event that draws attendees from all over the country. This year there were 17,000+ staff workers with over 50,000 fair-goers. I am trying to expand this to have more time to teach Balkan dances before each live Balkan performance next year. This is such a good opportunity to expose many (especially young folks) to Balkan dance and culture—people who might never be exposed otherwise.

I often go to local parks here to practice playing my kaval. In doing so I often get the opportunity to tell people about the kaval and dance and culture. I am not in a Balkan band now. I don't think that my playing is good enough yet. However I do play the kaval on occasion with other musicians with whom I play others types of music. I've been practicing a lot and hope to be able to play some Balkan music for our local dance clubs to dance to as my abilities progress.

Number of times at Balkan camp: I've been to Mendocino Balkan Camp three years prior to attending this year. I first attended camp in 2010.

Memorable moment at camp: I'm always so impressed with the how good the musicians are at camp and how hard they work to increase their skill and knowledge of the culture. I'm also impressed with how helpful and willing others are to mentor those of us that are at different skill levels, from beginner to advanced. Valeri Georgiev was the kaval instructor this year. He is so helpful and patient with his students that have such broad range of capabilities and skill levels.

I put in a lot of time practicing in preparation for coming to camp this year. However, I found myself feeling very frustrated as I was struggling with the material at camp. I thought I was further along than I was. Sometimes it seemed painful and hopeless to me. But now the lesson seems clear: seeking to improve in something requires hard work and patience. If it's worthwhile, then trudging through it with diligence and patience brings rewards later. I came home with much greater knowledge, skill and determination to keep working on playing the kaval. I have continued to practice diligently since camp and feel like I'm moving along quite well. It amazes me how when something seems impossible (such as some of the required fingering changes on the kaval)—if I just slowly work on the those changes that within a few minutes or the next day it becomes natural to do that which seemed impossible not long ago.