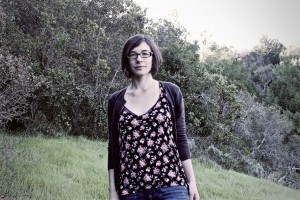 Occupation: I’ve been managing to survive on odd jobs, from gardening to babysitting, for the majority of the last year. My main gig is performing and recording original music under the pseudonym Chicken Mama.

Connection to Balkan music/dance: I enjoy the many opportunities to experience live Balkan music in the Bay Area. I’ve taken some workshops with Kitka and have a special interest in Turkish and Georgian music, especially from the Black Sea. I incorporate some elements of Balkan music in my compositions, and am envisioning a podcast that will allow me to keep learning about traditional music from around the world while supporting that education for others.

Number of times at Balkan camp: This was the first.

Studied at camp: I was focused on taking Pontic kemençe lessons from Bob Beer, as well as Turkish and Greek singing.

Memorable moment at camp: Two of my favorite experiences at camp were induced by dance. Learning Pontic dances in the main hall on the first night was a rambunctious delight. I’d spent some time on the Black Sea the previous summer and had the luck of attending several weddings. There is one common dance that I memorized and brought home with me . . . so it was very enriching to explore more of these dances with the community at camp. An impromptu old-time flat-footing lesson in the kafana was another unexpected highlight. I’m also grateful for the precious time spent with musical peers geeking out on what we were learning and finessing Georgian harmonies for a kafana performance.