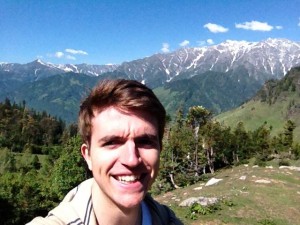 Location: I'm currently living in Sunchang, a small town in the Jeollabuk province of South Korea.

Connection to Balkan music/dance: I've had the opportunity to teach my students about world music (including that of the Balkan region), and I've been fortunate enough to perform some world music in my school concert—I've done Shona mbira (a Zimbabwean lamellophone, sometimes called thumb piano), Samul nori (Korean percussion ensemble), and some Bulgarian choir with students and teachers. There is a relatively large community of musicians and artists of different nationalities in my area with whom I've tossed around the idea of doing a recurring get-together, but nothing has yet come to fruition.

Number of times at Balkan camp: This was my first time attending the West Coast camp, but I'd attended the East Coast camp the previous year.

Studied at camp: My main focuses at camp were the brass band and music theory classes. 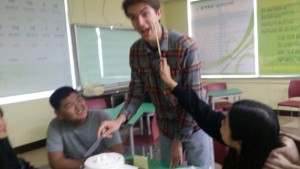 Ricky in the classroom in South Korea.

Memorable moment at camp: While writing this, I've had a pretty hard time coming up with only one impressionable moment from the camp; every day I probably experienced at least twenty! From eating breakfast huddled around the campfire, to fighting off the hordes of mosquitoes whilst attempting to comprehend maqam theory, to having my mind blown by the amazing musicians every evening, and the numerous late-night kafana conversations enjoyed over a gin and tonic (you know, for the mosquitoes). Every day seemed to be a constant stream of memorable experiences. That said, perhaps my favorite night was the lamb roast; one scene that particularly sticks out in my memory is Alex [Marković]'s cross-dressing čoček dance following his lecture. His willingness to perform in a way so contrary to our Western conceptions of normative gender roles struck me as particularly brave, and the genuine enthusiasm and participation he was met with are hard to put into words. It was a heartwarming experience, and encouraging for those also pursuing niche ethnomusicological goals (like me).