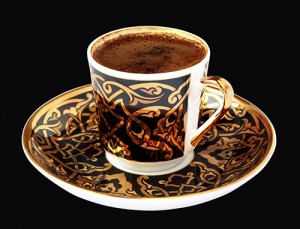 As a child, I grew up in a Russian Orthodox parish [in the U.S.] where many of the parishioners were deformed by WW I, the Stalin terror or WW II . . . eyes, parts of faces, missing body parts, that sort of thing. In many cases combined with the attendant psychiatry as well . . .

When I first became aware that the Americans had come up with decaffeinated coffee, this news came to me via the parish in the form that it was roundly judged to be “a communist plot to weaken America.”

It took me a few years to drill down to the reason for this view:

Coffee was considered to be the devil's drink . . . barbarian . . . nothing like Russian tea. Pilgrims were occasionally scandalized, in going to Greek monasteries, to be offered this brew. However, during the WW I disaster, Russian troops frequently found themselves without medicine. The nurses and doctors quickly discovered that really strong coffee could keep some of the wounded from going into shock and dying. Hence, among the first two or three waves of the Russian emigration, coffee was considered a somewhat beneficial medicinal drink to strengthen the constitution, even though it had a dodgy foreign past.

This post appeared on the EEFC listserv on Mon, September 1, 2014, and is reprinted here with permission from the author. Alexander Eppler, a multi-instrumentalist who has taught kaval at the EEFC Balkan Music & Dance Workshops, is a flute maker in Seattle.