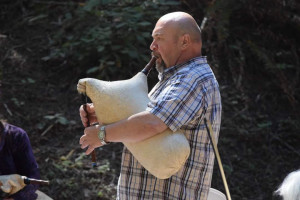 Through the pain of losing him, I have to admit, he couldn’t have chosen a better place to leave this earth. He went in his sleep, in the heart of a beautiful redwood forest, doing what he loved, surrounded by people he loved and who loved him.

I count myself as the luckiest of students, because I could see Vassil Bebelekov many times a year. Not that it guaranteed my bagpipe playing would improve, but as I remember our friendship, I realize the many rungs of the long ladder to becoming a better musician, a better gajdar.

I remember my first meeting Vassil as a bit of comic chaos. Twenty-odd years ago, Bulgarian dance teacher Petur Iliev was due to arrive at the Arcata Festival any minute. The opening concert, a mix of bands and short dance performances, timed to the minute, was about to begin. Petur appeared at the door, saying he had a guest who was a great gajda player. Could he, maybe, play for the concert? I remember Linnea Mandell corralling all the performers for the concert, asking them if they could shave off a minute or two, just to squeeze in 10 or so minutes for this real Bulgarian bagpiper to play. Room in the schedule was made (with a little grumbling), but Vassil became a part of the Arcata Festival for every year thereafter. 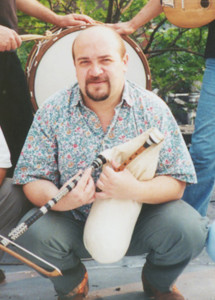 Vassil would also become a mainstay of Balkan camp, teaching Thracian gajda, bitov ensemble and, of course, the Rhodope gajda.
In the Balkan camp environment, it’s easy to see only one dimension of someone. Vassil was a musical virtuoso and teacher. But he had many more layers to his life.

As you might imagine, gajda students are always looking at the teacher’s fingers. I remember first noticing his Masonic ring. His eyes glinted as he smiled that particularly impish smile of his. He liked hobnobbing and being a mover and shaker. Vassil also loved wordplay and puns. His use of “Nice driveway!” as the anglicized “na zdrave” whenever a glass was raised, was carved into a flask given to him by his music students at UCLA.

And, he loved to cook.

For many years, at festivals such as Kolo Festival in San Francisco and our own Arcata Festival, Vassil would exchange his gajda for an apron to make mouthwatering vinen kebab, moussaka, baklava and other specialties.

But, of course, his deepest passion was bringing music to people. Years ago, he and his wife Maria were attending a party in Arcata. After I had introduced them as our teachers, Vassil told the crowd that, rather than students, he and Maria regarded us as his “colleagues.” My mouth hung open. I cannot recall ever feeling so flattered. Vassil loved teaching, considering his students to be more like family members. 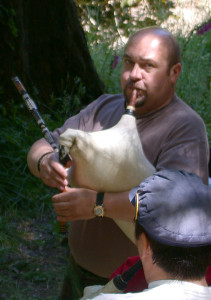 With his passing, I’ve dedicated part of my life to helping get gajdi in the hands of those who want them. Along with colleagues of the “Gajda Mafia,” a joke name for his students who took up the kaba gajda, the low, deep bagpipe of his native Rhodope Mountains, I feel that continuing Vassil’s legacy of gajda creation, repair and spreading of this wonderful musical form is the best way to honor his memory.

I would like to give great credit to Bill Cope and Ivan Velev with setting up a wonderful memorial website. I also value all the support Bill gave to Maria and his daughter Didi in dealing with his estate as well as the inventory of his workshop, collecting the various instruments Vassil was repairing and returning them to their owners.

I will be reminded of Vassil with every Bulgarian tune I hear or when I pick up my gajda, especially among fellow musicians who share these memories. Every year, following the class, each crammed with quick lessons in ornaments, hastily corrected sheet music, a plague of tuning issues, but finally a well-performed piece, he would look up, beaming, and say, “Wow! The best bitov in the world!”

And he was right, every time. 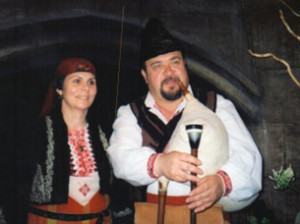 Vassil passed away on July 31, 2016 at Lark in the Morning Music Camp in the Mendocino Woodlands. He is survived by his widow, Maria, and daughter, Kostadinka (Didi). He was preceded in death by his son, Jivko, in 2005.

Photos, videos, comments and memories are available at https://vassilbebelekov.memorial.