What’s Up with the Keyboard Sheath? 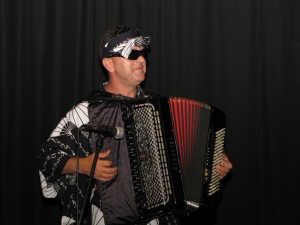 Raif often performs with a black satin fabric panel covering his accordion keyboard. Here’s how that got started.

Back in elementary school, Raif attended regular school in the mornings and music school in the afternoons, where he studied classical music on accordion. After school he would practice his scales and exercises while his mother was doing the dishes.

“Can you please stop that and play some folk music?” she would say.

One night she playfully tossed the dish towel at him. It hit him on the shoulder and covered the keyboard. He told her to leave it there.

“I started playing,” he says. “It was cool! The towel was thick, so when I would try to hit one key I would hit two sounds by accident. That didn’t make me happy, so I started working with it, trying to get more precise.” He asked his mom to make a thin cover for his keyboard using her sewing machine. When she asked why he needed it, he said, “I want to invent something.” He was a competitive teenager; many of his friends played accordion, and he wanted to do something different.

He ended up asking her to make two extra covers, and then he took them back to his friends. “Now the battle began!” he says. He would challenge them to play the same piece; he would play with the cover and do it better than they could, since he’d been practicing that way.

“When this happened I was so happy,” he says. “I started practicing even harder. It was harder to play, so it was like pushing yourself to become a better musician. Playing with the cover makes me feel much better psychologically and you develop better technique. Even a lot of great players have a tendency to look at the keyboard, if you have a cover, you can still look but you don’t see anything.”