In this section we bring you some recent posts from the EEFC’s listserv.

The listserv is a discussion list where subscribers post and discuss items of interest. It has a searchable archive going back to 1993 (available to anyone) and has been overseen by list angels Noel Kropf and Emerson Hawley for most of that time.

This time we bring you highlights of two recent discussions: one about the scheduled 2015 Bulgarian national folk festival in Koprivštica, Bulgaria, and one on the dance Godečki Čačak. 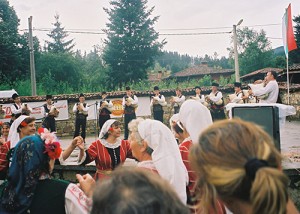 Koprivštica (official name: Национален събор на народно творчество—National Festival of Folklore) is a Bulgarian national folklore festival that is held every few years, typically, once every five years, in the historic town of Koprivštica. It draws visitors from all over the world, including many from North America. In July, Joan Hantman posed this question on the EEFC listserv:

Does anyone know the dates of the Koprivshtitsa festival for next year? I'm trying to plan ahead.

Responses to Joan’s question—and to a similar one posted in mid-October by Whitney Neufeld-Kaiser—included speculations and eventual confirmation about the dates, along with various resources that could be helpful to someone trying to plan a trip for next summer. Here are some highlights.

Larry Weiner announced this on July 31 and posted a more detailed announcement on Oct. 22:

2015 Bulgarian Folk Music & Dance Seminar in Plovdiv, Bulgaria
July 31-August 6, 2015 (immediately before Koprivshtitsa festival; the seminar ends the day before the festival begins; a chartered bus from Plovdiv to Koprivshtitsa will be available for seminar attendees on August 6th).
This seminar, now in its 11th year, offers a special experience for non-Bulgarians (and Bulgarians interested in connecting with their "roots" music and dance) who want a more in-depth opportunity to learn traditional instruments, singing styles, and dance than is normally possible for groups or individuals traveling to Bulgaria. This rich and unique program couples the teaching expertise of instructors at the Academy of Music, Dance and Fine Arts in Plovdiv (http://www.artacademyplovdiv.com/) with the traditional music and dance wisdom of tradition bearers from around Bulgaria. The dance program features different groups of dancers and musicians throughout the week, teaching dances from their own villages. A Bulgarian language class will also be offered, as well as optional evening social activities.
Special 15% discount for EEFC members!
Website
Facebook

Paula Davis mentioned this on June 16 and Joseph Benatov posted the link on Oct. 16:

Goran Alački is planning his seminar in Macedonia to end at a convenient time so people can get over to Koprivshtitsa afterwards.
Goran Alački’s Macedonian Pearl Seminar—10th Anniversary!
July 25-August 3, 2015
Berovo, Macedonia
Website

Wally Washington posted this on Oct. 22:

It’s been more than 20 years since I have been, though I doubt that this has changed, but for the folks looking for tips on the Koprivshtitsa festival there is one point that should be made explicit. There is not much in the way of hotel space in Koprivshtitsa, or even very close by. That is one reason for the popularity of tours; the tour will have the housing aspect taken care of.

Can you get to the festival on your own? Sure, people do it every fest. Can you get a room in town? Sure, at least maybe. One year I got a room for Saturday night on Saturday morning. But you’d better be pretty flexible if you attempt that—I had a backup place to stay an hour away with the tour I was on. I don't know that I would encourage someone to try to go on their own.

And as in all things, the different tours will have different styles and appeal to different people. One year when I was more on top of things I almost posted to this list an only slightly snarky listing of my impressions of the different tours. So it may be wise to pay attention to which tour you are signing up for. Though I suppose they will all get you to the festival each morning. (Though I do have a memory of some tours not getting there in time for Friday of the fest.)

And Barbara Babin posted on Oct. 23 that she had a contact for some rooms for rent during the festival, but on Oct. 29 posted that that they were now all taken.

It can pay off to follow the listserv on a daily basis! You can choose to receive individual messages in your email inbox or receive a daily digest. Click for information on subscribing. 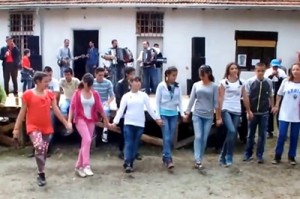 A shot from one of the YouTube links provided by Larry Weiner on Dec. 13 (https://www.youtube.com/watch?v=wS9ziH7oZGY).

It all started with a question from Judy Stafford on December 9 about a dance that has long been popular among international folk dancers:

I always thought Godečki Čačak was a Serbian dance, but found out recently that it is named for a town in Bulgaria, near the Serbian border. It appears that Dick Crum introduced the dance to the IFD community. Is it a dance that is/was actually done in Bulgaria and/or Serbia? If it's a border dance, then is the "standard" IFD music for the dance (as in the below YouTube link) Serbian, Bulgarian, or does it also cross the border? I can't find any credits for the standard recording—is it Serbian or Bulgarian?

Judy’s question sparked a lively, weeklong discussion spanning almost 40 posts and yielding historical and folkloric insights from some of the EEFC's best-known dance teachers and scholars. Comments address the musical structure, the dance steps, regional variations in the number of measures, changes in the dance among emigrants to the U.S., and more.

Our listserv is wonderful, but it can be cumbersome to search and retrieve all the related individual posts. Laura Blumenthal volunteered to assemble the entire (as of press time) thread into a 26-page document that is available here as a PDF download: Godecki_Cacak_thread_EEFC_listserv_12.2014.