Or, how lessons learned in 1972 Philadelphia paved the way for succulent treats at this year's Iroquois Springs Balkan camp kafana.

Rock Hill, NY, August, 2014. Iroquois Springs, behind the Canteen. A large, rectangular black gas grill stands beneath a canopy ringed in Christmas lights. Alan Zemel and I tie on our aprons and lay out pans full of chicken, ćevapčići (finger-shaped patties of ground meat and spices), sausage, pork chops, sliced zucchini, carrots and eggplant on long tables next to the grill. Whole heads of garlic are doused in olive oil and wrapped in foil. We fire up the grill, and I place red bell peppers on the flame to char and strew thinly sliced onions into a skillet to begin a slow caramelization. Inside the canteen, or the kafana, as it is known for this week, Laine Harris, Matt Smith and crew bustle about, setting up the bar, tables and kitchen stations, as we all prepare for the late-night onslaught. All is ready. We take a short break, while Alan tips back a Zywiec beer and I a Schwepps Bitter Lemon. 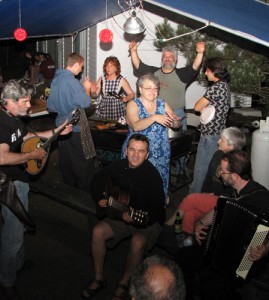 Soon hungry dancers make their way through the wooded paths from the dance hall. Game on. Orders make their way from the kitchen and the meat begins to sizzle. In the meantime, Yianni Roussos shows up with some friends. He pulls up a chair behind the grill and regales us with bouzouki and rebetika while we madly roll around ćevaps and flip zucchini planks. When there’s a little break in orders, Alan pulls out his baglamas and joins Yianni. People gather to hear the music, dance a bit, and of course inhale the delicious aromas of cooking and warm themselves over the flames. Welcome to the Kafana Grill.

As someone who actually has a paid job running the workshops, I’m a bit unclear as to how I began to volunteer as the de facto Gril Friday to Alan’s Grilmajstor. It’s intense labor that extends into the wee hours, makes my glasses greasy and my feet ache. But as the years have passed and we have perfected our cooking “dance,” I wouldn't miss the experience for the world.

Every year brings refinements. We try different foods and techniques—some work, some don’t (just don’t talk to me about parsnips!). One year Alan treated grill patrons to Korean-style ribs. Then, two years ago, he recalled a fresh sausage that he’d learned to make as a teenager from his Romanian neighborhood friends in Philly. So before camp he packed his KitchenAid and attachments and placed a big order for pork butt with the Kafanamajstori. At camp, under Alan’s expert tutelage, I was inducted into the mysteries of cârnaţi. 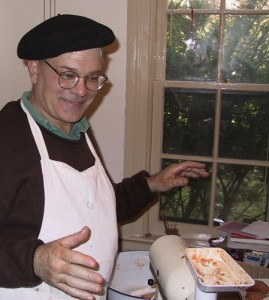 That first year I helped prepare and grind the meat; last year I assisted with filling yards of sausage casings. Learning to inflate the soaked sausage casings seemed to be a particular challenge for me (there is video proof of this operation whose images I will leave to your imagination), but I rose to it, I’m proud to say. For the rest of the week the menu featured grilled cârnaţi, paired with a smooth, sharp sour cream-horseradish condiment.

As His Gril Friday, not only was I privileged to partake in the pleasures of Romanian sausage-making, I was also lucky enough to obtain the backstory from Alan.

Philadelphia, December, 1972. Alan was 17 years old. He had become fast friends with Carmen Valentino, a graduate student who had just returned from a Fulbright in Romania. The two of them would sit in the back of the room where the U Penn Balalaika Orchestra (a 40-piece band led by Steve Wolownik, a “major musical force, quite extraordinary,” as Alan recalls) held its introductory class. As the instructor, Charlie Moore, did his best to show his charges how to “twinkle-twinkle-twinkle” on the balalaika, Carmen, Alan and a couple other guys raised hell in the back of the room, sneaking drinks, joking around, being “real huligany.” 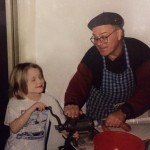 In December, as winter break approached during Alan’s freshman year at U Penn, Carmen called, “Whyntcha come over—we’re gonna make some cârnaţi!” Alan paused questioningly. “It’s sausage, come on over!” Alan took the subway and the trolley, finally reaching the house where Carmen and his parents lived on Richmond Street, in a blue-collar neighborhood. Alan recounts, “I walk in, say hello to the old man, the mother, the grandmother, the little sister, and we head straight to the basement.” There sat 30 pounds of pork butt and a case of beer. Carmen looked around and said, “I ain’t got no whiskey! I’ll be right back!” He returned shortly with a bottle, cadged from his brother’s bedroom, after which the two began a long series of shots and beers, toasting one another with “Noroc şi bani, şi sănătate!” (Luck, money, and health!) along with some unprintable, off-color sentiments. They pulled out knives and cutting boards and chopped the meat into chunks. In those days no one had KitchenAids, so they fed the meat pieces into a hand grinder clamped to the table. Arduous work it was, and as Alan says, “the more tedious it got, the more we drank . . .” It therefore took all afternoon to grind the 30 pounds. 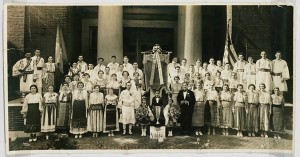 From now on the details are sketchy, but the two then decided that they needed expert help for the next stage. Somehow they managed to get themselves (“pretty lit by this time”) and the ground meat to the house of Katie Batejan, who lived in the nearby Kensington neighborhood of Philadelphia. Catiţa, or “Katie” Batejan belonged to the same church Carmen had grown up attending. Katie’s parents had emigrated from the Romanian Banat village of Pesac in 1912 and settled in Kensington, where she was born in 1916. “Katie had this viciously wicked humor,” Alan says. “She’s throwing salt and pepper into the meat, splashing water in and mixing it all up.” Suddenly she dipped her finger into the meat and held it up, “Wanna try it? See if it’s good yet?” Before a horrified Alan, who was fully cognizant of the dangers of raw pork, she then popped the morsel in her mouth: “Needs more salt!” 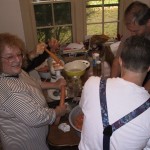 When the mixture was seasoned to Katie’s satisfaction, they attached Carmen’s Romanian grandma’s old homemade sausage funnel to Katie’s grinder and filled the casings, which had been soaking in brine to soften them up. As was traditional, they formed the cârnaţi into long ropes rather than short links. Time at last for a real taste test. Katie seized one of the smaller ropes of sausage and, after melting a large chunk of lard with a bit of water in a giant frying pan, she nestled the meat in the skillet and covered it with a lid. After some time she flipped the sausage to cook the other side. In the meantime, she mixed up the traditional accompanying condiment, composed of prepared horseradish and sour cream. Alan continues, “We feasted with more shots and beers well into the night. I don't remember anything after that.” 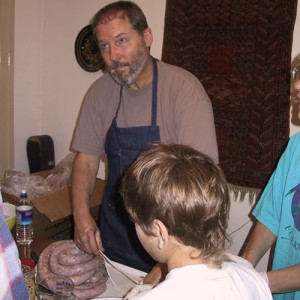 For many Decembers following, Alan, Carmen and their friends and family would gather for cârnaţi-making parties. Alan recounts that at some point they ground up to 125 pounds of meat, the resulting sausages from which were divided among four or five families. Everyone would have a chance to help in the process, which would always end in a big feast of mămăligă (Romanian-style polenta), green salad, bread and of course, whiskey and beer.

Carmen recalls that his Transylvanian relatives from near Sibiu would slaughter a pig at Christmas time. They’d make bacon (slănină) and other preserved meats, using all parts of the animal. Making cârnaţi was an easy way to feed a lot of people right away from the annual pork bounty.

Chop meat into rough chunks. Using a meat-grinding attachment on a heavy-duty stand mixer, grind the meat coarsely. Mix in chopped garlic, salt, pepper and water to a pasty consistency. (If you need to check seasoning, I’d recommend frying up a bit of the mixture before you sample.)

Using a sausage-filling attachment on the stand mixer, or other sausage-filling device of your choice, fill casings. The traditional method is to fill an entire casing, or you may choose to tie off the sausages into shorter links as you fill.

To cook the authentic way (“a heart attack waiting to happen, but so juicy and tasty!”—Alan):

In a large, heavy skillet, melt lard till hot, place sausage in pan, add a bit of water and cover the pan. When the bottom of the sausage has crisped up, turn and fry the other side. The water will ensure that the sausage steams and cooks through at the same time the exterior browns.

To cook the modern way, grill or pan-fry till done (160° F interior temperature), or you can even bake the sausages in the oven.

Serve with a sauce of prepared horseradish (the strongest you can find) mixed with sour cream and salt to taste, alongside bread or mămăligă. Share with friends and enjoy the feast.

Alan Zemel is an Assistant Professor of Communication at the University of Albany, SUNY, specializing in conversational analysis. Alongside his academic and musical accomplishments, he has served as Grilmajstor at the East Coast Balkan camp for the past decade. At least. He was profiled in the Spring 2011 Kef Times.

Carmen D. Valentino is an antiquarian bookseller who is also deeply involved in archiving the history of Romanian Americans in the Philadelphia area. See his contributions to the Historical Society of Pennsylvania website here; note especially his document 10775, A Brief History of Societatea Bănăţeană V. Alecsandri.

Rachel MacFarlane is the curator of "Balkan Bites." She has been intrigued by Balkan languages, folk music and domestic arts for over 35 years. She has performed with groups such as Seattle’s Radost Folk Ensemble, constructed Balkan folk costume reproductions, translated and transcribed Balkan folk song lyrics, created beaded-crochet snakes, and explored Balkan and other international cuisines. She served as EEFC’s General Manager and Program Director for many years and in 2013 returned as EEFC's Workshop Manager. Rachel resides in Oakland, California, where she plays baritone horn with Fanfare Zambaleta.