Sharing with the Future: Workshop Scholarships

In 2014, two longtime campers stepped forward to honor the memories of folk-inspired family members with long-term scholarships for new campers.

Jerry Agin has committed $20,000 to sustain the Stefni Agin Memorial Scholarship, honoring his late wife. Roger Cooper has committed $10,000 to create the Lillie Cooper Memorial Scholarship, honoring his late mother. I spoke with Agin and Cooper family members recently about their decisions to make these contributions, as well as the legacy they hope to create. Common themes emerged in all these conversations: community, the impact of folk and Balkan music in particular on their lives, and the unique place the EEFC holds for them in family life. 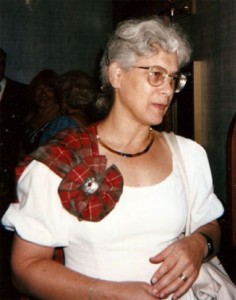 Stefni Agin had long been passionate about various folk traditions, and together she and Jerry participated in many kinds of dancing, including Scottish country, Scandinavian and, of course, Balkan. In fact, they met in 1969 at a Kolo Festival in San Francisco, and attended camps at Sweet’s Mill in the in 1970s that were precursors to the EEFC Balkan Music & Dance Workshops. By the 1980s they were living on the East Coast, and Stefni attended the 1986 East Coast camp on her own. She returned home saying, “We have to go back next year,” and Jerry, somewhat jokingly, says he responded to her with a “Yes, dear.” Sure enough, they did, and it was that first camp in 1987 that changed things for Jerry. “It just blew my mind because I hadn’t thought about playing music for dance. It lit a fire under me.” For more than 20 years, together they were dedicated to the Balkan scene in the Pittsburgh area they called home, and beyond.

Stefni co-formed and sang with the women’s vocal group Balkan Babes for many years, at home, and at camp, even in her last year of camp, singing while under treatment for cancer. She favored Macedonian songs, and was also an avid costume collector. Many pieces of her collection have circulated back into the EEFC community, as Stefni decided to donate pieces to the EEFC auction, and to the Balkan Bazaar store run by Suze Stentz and Richie Leonard. In 2008, just about a month before Stefni’s death, Jerry drove these treasured items to camp, and due to the long trip spent one night on site. While he was there, campers spontaneously decorated a bed sheet with messages of love and encouragement for Stefni. Jerry drove it home, where he hung it so Stefni could see it from her bed.

Jerry describes Stefni as kind and outgoing, saying that she made friends easily. It’s his belief that Stefni would like knowing that the “music she loved is being perpetuated, particularly by bringing young people into it.” Jerry said that Stefni’s ongoing volunteerism with new immigrants in the Pittsburgh area kept her connected to the future, and optimistic about the next generation. She was interested in seeing that the traditions the EEFC and campers have kept be shared. That’s the future, and she knew that we should not keep them just for the “oldsters” but share it with the next generation.

Jerry Agin began sponsoring the Stefni Agin Memorial Scholarship in 2009, the first year after Stefni’s death. Since then Agin scholars have attended the East Coast workshops every year except 2012.

Roger Cooper started folk dancing as a child on Long Island, N.Y., with his mother, Lillie, and later met his wife Judy Olson while folk dancing at Columbia University. Roger and Judy are now longtime campers at the East Coast workshop, and have brought their children Ellen and Michael Cooper to camp since 2005. Lillie was a longtime international folk dancer, who danced with Huntington Folk Dancers in Huntington, Long Island. She died in 2013.

Ellen shared with me that her favorite aspect of being a longtime camper is being in the community and around people where “you are playing music all day.” It’s a “fantasy world,” one that has been a part of Ellen’s life since she was nine. Ellen, who started the violin at age three, said that her grandmother Lillie was always supportive of Ellen studying music. “I think she would be honored to know that her money was being put toward this,” she added.

Coming to camp for as many years as she has, Ellen has had the chance to pick up and experiment with a great many instruments along the way, including accordion, tambura and doumbek. In high school, Ellen played in the chamber and pit orchestras, which included playing accordion for a production of Fiddler on the Roof. Currently enrolled as a freshman at New York University, Ellen is playing janggu, a Korean folk drum.

The Lillie Cooper Memorial Scholarship will be offered for the first time in 2015, and as Lillie herself was a dancer, it will cover full tuition for a dancer to attend the East Coast workshop.

If you’re drawn to the idea of sharing the treasure of Balkan camp through scholarships, there are a number of ways you can do it.

The Stefni Agin and Lillie Cooper scholarships described above are in addition to the EEFC’s own scholarship, the Dick Crum / Kef Scholarship. Through generous donations from our community, a number of full- and halftime scholarships are awarded most years to each camp. They go to a range of people—both new and returning campers; singers, dancers and instrumentalists of various levels. Some of the funds collected at the 2014 camp auctions were raised specifically for the scholarship fund. In fact, whenever you make a donation to the EEFC apart from your annual membership, you have the option of earmarking your contribution for scholarships.

Another current scholarship is funded by profits from Balkan Night Northwest. That scholarship has sent one camper to the Mendocino workshop for each of the past three years. (Their 2015 event will be held Sat., Feb. 21; check it out!)

If you are considering establishing a short-term scholarship, or an ongoing one such as Jerry Agin and Roger Cooper have done, please contact Amy Mills c/o board@eefc.org.

One more thought: through the years, various performing and recreational groups throughout the country have set up their own scholarship programs whereby they send a deserving member to an EEFC workshop each year, or occasionally. Such scholarships, of course, are not administered by the EEFC, but setting up such a scholarship in your group is another way to support deserving campers.