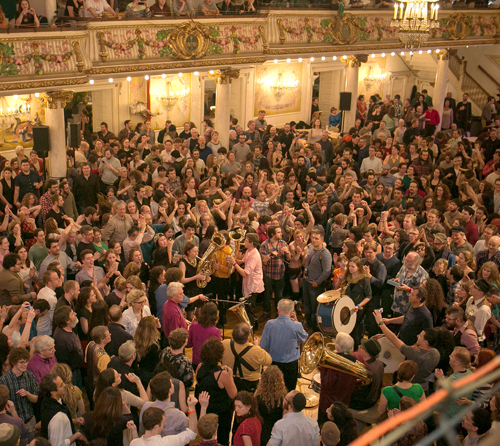 The landscape for Balkan music in the United States was very different 30 years ago. Zlatne Uste had formed two years earlier. It was composed of amateur musicians, many of whom were folk dancers. Their sound was not polished. Their repertoire was mostly dance music that had been presented at the EEFC East Coast Balkan Camps in 1983 and 1984. The only audience for their music consisted of folk dancers in the New York area. There was only one other group of Americans playing Balkan music in the New York area, the Balkanizers, led by David Skuse. In an effort to create a venue to play, Zlatne Uste decided to organize a party, and to invite our colleagues to join in as performers. We called it the Golden Festival. The architects of the party, Drew and Laine Harris, informed by their experiences at Buffalo Gap and at other dance extravaganzas, had a clear and simple idea of how to make a successful party: to provide good music, an attractive space, and ample food and drink to fuel good feelings and dance energy. This is essentially the same formula that communities from the Balkans use for their own parties. 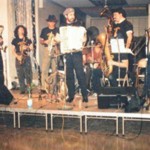 The early Golden Festivals were planned and executed by members of Zlatne Uste and by Cathie Springer, who hosted many of the Zlatne Uste rehearsals. Drew and Laine took care of most of the details concerning food and Emerson Hawley took care of providing liquid refreshments; still others in the band contributed by helping with publicizing the event. It was held at the Ethnic Folk Arts Center on Varick Street, a space where weekly Friday night dances were held. The walls of the Varick Street venue were painted white, with a hard and shiny surface. Cathie immediately ran home to her loft and brought back loads of handwoven Balkan rugs and blankets to help improve the sound—those textiles have been the backdrop for the festival stages ever since.

The first Golden Festival was attended by about 100 people and was considered a great success. 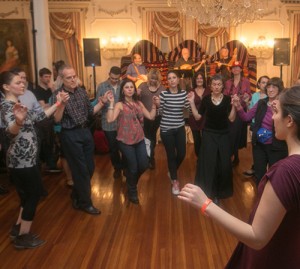 The design of the festival has not changed over the years. Gradually, more and more musicians requested to participate. At the same time, there was a slow and steady growth in the number of people playing Balkan music, mostly spurred by the success of the EEFC workshops. In addition, some of the ethnic musicians in the area asked to participate as well. Ramiz Kurtali, Souren Baronian and Avram Pengas were the first of such musicians. Souren and Avram continue to be a part of the festival every year.

The Varick Street space became unavailable after the seventh Golden Festival, and Zlatne Uste needed a new venue. Michael Ginsburg spearheaded a search that resulted in the festival move to Context Studios on Avenue A. The number of musical groups that wanted to play had increased to the point where it was feasible to have two stages going on at the same time, which was very appealing to members of Zlatne Uste. The move to Context Studios made this possible. Also, Context Studios was located in an area of New York that was just becoming a hip neighborhood and therefore attracted a new subculture of people to join us. One of the attendees, the late Mirjana Laušević, an emigre from Bosnia who heard about the Golden Festival at a chance encounter with Jerry Kisslinger (a drummer with Zlatne Uste), was so moved by the festival that she chronicled her experience there in the book Balkan Fascination. She came back to the Golden Festival as a performer the following year. 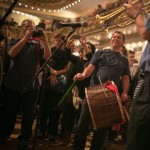 Despite having no permanent home, the Golden Festival experienced slow growth over the next few years. Finding a space with room for multiple stages became essential.

Emigres to the U.S. from Eastern Europe in New York also gradually discovered the festival. Part of the mission of the festival was also to provide a venue for fledgling music groups. The Golden Festival was the first gig for a number of developing young ethnic musicians. They would be accompanied by their friends and families, and many of these people would become fans of the festival. In addition, many well-known musicians from the Balkans who have emigrated to the U.S. perform at the festival. The roster of notable musicians who have performed includes emigres Yuri Yunakov, Raif Hyseni and Merita Halili, and non-emigres such as Loretta Kelley and the musicians of Sviraj. 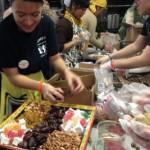 Today, the Golden Festival is planned and operated by a committee of volunteers that includes members of Zlatne Uste along with other talented and dedicated people. In 2011, the festival moved to the Grand Prospect Hall in Brooklyn, a high-end catering facility. This was a timely move, because the festival had outgrown the church hall that had previously hosted the festival. However, moving to the Grand Prospect Hall meant taking a large financial risk—the rental fee was about five times that of our previous space. Nevertheless, Brooklyn has proven to be a great place to hold the festival. Many of the local musical groups that had emerged over the years were from Brooklyn and had developed fan bases there. Attendance almost doubled immediately and continues to grow (about 3,000 combined for Friday and Saturday in 2014).

While the principles of the early festivals continue to guide decisions about the festival today, the changes in the size and scope of the festival have created new issues for the organizers. For example, Zlatne Uste felt uneasy about keeping the event profits, since all other musicians performing were volunteers. After the onset of the Balkan Wars, it was decided that all profits would be donated to the International Rescue Committee, a group actively providing relief in the Balkans. Since then, each year profits have been donated to several groups providing relief in the Balkans or serving to educate people about the Balkans. 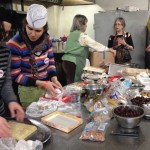 With the growth of the festival have come new challenges.  Publicity has become a major concern because of the financial obligations of putting on an event of this magnitude. Security is a major issue as well as a major expense. Insurance was not a concern at the early festivals. The Golden Festival is still put on by volunteers (including musicians and the organizing committee) but expenses have skyrocketed. The Grand Prospect Hall is very expensive, and it also costs a lot more to provide food and drink for thousands of people. Sound enhancement must be provided for four stages. Programming the festival has become a giant puzzle. Many of the musicians perform with multiple groups and care must be taken not to schedule those groups at overlapping times.

This year's festival is the thirtieth, and in almost all aspects, it is 30 times larger than it was the first year. Its most important publicity has come through word of mouth. The Golden Festival takes place on Friday and Saturday nights during the weekend of the Martin Luther King Jr. holiday. Events associated with the Golden Festival occur before and after the actual festival at various clubs around the city. 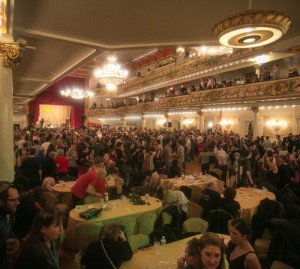 None of us in Zlatne Uste envisioned the Golden Festival becoming the event it is today. It has taken on a life of its own, appealing to all generations and to people in all walks of life. Zlatne Uste has performed at great venues around the world, has been the subject of the documentary film Brasslands, and has represented the United States at the brass band competition in Guča, Serbia, but the Golden Festival is our signature event. It represents the best of Zlatne Uste, and the best of our community. 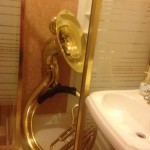 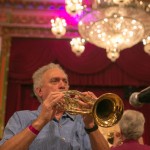 Michael Ginsburg has been director and lead trumpet player of Zlatne Uste Balkan Brass Band since 1983. A native of New York City, Michael has led regular Balkan folk dance classes for many years there, and been a featured teacher at the Macedonian Pearl seminar in Berovo, Macedonia, and a regular teacher at the EEFC workshops. With Zlatne Uste, he performed in 2010 at the Guča Trumpet Festival in Serbia, representing the United States in the first-ever international band competition held there.