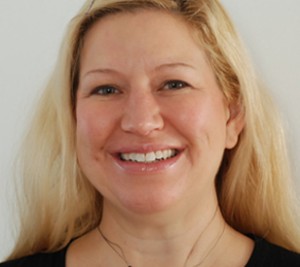 Occupation: Applied behavior analysis therapy with children with autism; wife to a trumpet teacher and graduate student in trumpet performance, Matthew; and mother of three, about to be four little ones, Elsie, Lili and Ezra.

Connection to Balkan music/dance: Matthew and a core group of students at Michigan State University and community members started a Balkan brass band, Slavistar, last year. They have been popular at open mic nights at local establishments. As a family, we enjoy participating in any Balkan music events and I've wanted to incorporate some songs that include singing into Slavistar's repertoire with anyone who is interested in learning.

Number of times at Balkan camp: This was a first for us at an EEFC camp.

Experience at camp: I feel like I learned so much from Elitsa [Stoyneva] and Lauren [Brody]. I really enjoyed the time I was able to spend in their classes learning to sing with my "Balkan voice," as Elitsa would say. I have a new love for the accordion from participating in Lauren's class

I was absolutely touched by the children's music performance as they presented their play and music. Elsie, who is 5, has continued to sing the song they learned for the performance, which I believe is in Arabic. I know that there was a lot of dedication put in by Marlis [Kraft-Zemel], Abby [Alwin], and Stacey [Anne Sternberg].

Oh, and what fun it was to go to the Kafana with Matthew for a brief period one evening to watch the mixer bands and spend time getting to know people, while enjoying the music. Our precious cabin roommate moms, Stasha [Hughes] and Monica [Ravinet], made sure the children were looked after well. Monica had to make her way to the Kafana at 2:00 a.m. as Ezra had decided he missed us!